Twenty years after it won six Oscars and became the stuff of legends, including making the AFI's Top 100 movies of the 20th Century, All About Eve was adapted into the musical Applause, with music by Charles Strouse, lyrics by Lee Adams and book by Betty Comden and Adolph Green. The transition seemed natural considering that it's about an aging Broadway star Margo Channing and her conniving understudy Eve Harrington. The musical was just as successful as it should be, despite lyrics and tunes that are at times silly. That being said, Alive, Applause and Welcome to the Theatre are fabulous and to my ears, are perfect theatre songs. I love the original cast recording, despite Lauren Bacall's abrasive vocals. Not only did the show win the 1970 Tony, Lauren won for best actress, beating Katharine Hepburn in Coco. In 1973, the musical was produced for television. It's rather ridiculous show as a whole, but it is a cult favorite among Broadway musical lovers. Last fall, the Paley Center showed it on one of their big screens and we had a blast watching it, laughing out loud at the corny fabulousness and over the top "acting" from Lauren Bacall. When Encores! announced that Applause would kick off their season, I was excited. I was even more excited when I heard that Christine Ebersole would play Margo Channing. I couldn't wait for her gorgeous soprano to tackle Welcome to the Theatre. She delivered and she even managed to turn Hurry Back into a gorgeous love song. When she took the stage wearing a sparkly red dress and as a platinum blonde, she looked old time Hollywood glamorous. However, despite it's leading lady, this production didn't thrill. Perhaps I was sitting too far away, but I felt disconnected from it. The choreography was tired, the action slow. The actors were working overtime to deliver laughs. I enjoyed seeing them all - Chip Zien, Kate Burton, Megan Sikora, Erin Davie and Michael Park. But for me this show failed to fill the big shoes worn by last season's Encore! momentous event of Follies. Not that I was expecting Sondheim, but still. 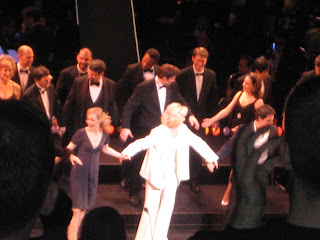 But how was the show?!