Gangway, world, get off of Patti's runway! 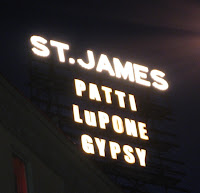 Did you see the City Center production of Gypsy that starred Patti LuPone as Mama Rose last summer? Well, if you did, then you are in for more of all of that exhilaration at this Broadway production. And if you didn't, I suggest you get down to the St. James and get yourself a ticket immediately. The set is the same, most of the actors are the same, most of the costumes are the same, the stuffed dog and the lamb puppet are the same, but best of all, the out of this world performances by everybody on stage are the same and perhaps even better. The major differences are that Patti wears a great wig and has a few more costumes. She looks incredible too - lean and mean. While it was hard to improve on that 3 week turn last summer, some of the scenes are better played, mostly just slower to emphasize the relationship between Rose and Herbie, especially Small World and You'll Never Get Away From Me. Patti's Everything's Coming Up Roses is just as fierce and thrilling! Her Rose's Turn is a little different, the lines Hold Yer Hat and Hallelujah are back as well as Mama's Talkin' Soft, thank goodness, but it's even more maniacal than before, even more of a fantasy and teeters on the edge of a breakdown. She fairly screams it and I can't imagine how she'll be able to do that eight times a week. The very end of the show, before the curtain falls, there's an addition. I loved it but I won't tell you what it is - you just have to see it for yourself. The 25+ piece orchestra is on stage, just like at City Center and is glorious (couldn't we have an orchestra at every Broadway show?!), treating us to that incredible Styne overture, which earned its share of applause. The audience just about stopped the show at Rose's first "Sing Out Louise!" and did stop the show after Rose's Turn. It was an incredible, thrilling, heart-pounding high humor, high drama show, arguably the best musical ever written, and I'm so glad we were there to witness it all.

Speaking of high drama, there was plenty in the audience too. During Gypsy's strip, some strange man kept yelling out, "Sing out Louise!" He also yelled out "I Love you Patti!" after Rose's Turn as well. I don't know if he was retarded or what, but it was irritating. However, the real drama happened during the dressing room scene just before Rose's Turn, some sort of accident happened. We couldn't see it from the orchestra, but it was loud enough to make 1/2 of the audience turn and look up. There was a loud crash and immediate crying. Somebody shouted, "Are you okay?" The person proceeded to cry very loudly. I don't know how Patti managed to go on with Rose's Turn, but as Rose says, "That's show business." There was an ambulance parked in front of the St. James. I heard that a piece of metal air vent fell from the ceiling and hit a patron. I also heard that somebody was choking somebody else at the end of the first act and had to be escorted out by security. I do hope everybody is okay and will laugh this off when they get their free tickets for another accident-free performance. Patti is literally knockin' 'em to the aisles and bringing down the house. Maybe there should be an ambulance permanently parked at the St. James.

Arthur Laurents was sitting near us, as was Raúl Esparza (an evening of light theatre on his night off from The Homecoming?). We saw Jim J. Bullock too (he's from Odessa, Texas! and is just as nice as nice can be). We had pre-show dinner at Angus McIndoe's (Angus, what's the bloody deal with the cheap paper napkins? And did our favorite small steak salad get even smaller?) and sat next to little Sami Gayle (Baby June), who was having her own pre-show dinner with her whole family. 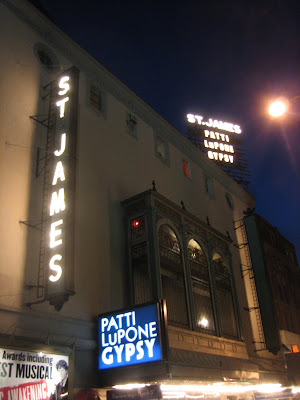 Thanks for the great report! I remember the sense of anticipation and excitement in the audience last summer was just incredible and I know it's going to be the same when I see it later this month!

I hope the person who got hit with the air vent was ok.

Thank GOD they restored the Turn. That was the most jarring thing I heard the entire night last July.

Was the Kringelein scene back, or did Laurents decide to leave out that riotous scene? ("June, fetch the Bible!")

Sounds glorious and glad you had an exemplary night at the theatre!!

Unfortunately, no Kringelein scene and no Small World reprise.

Holy canoly! Someone was CHOKING someone else? Jesus!

What a night. Wish I could have been there! Glad to hear Patti's bringing it home.

You must email me the spoiler. You must.


"Turns out the man was choking another man in the row below and acting crazy. One of the girls who kindly got security was Katherine McPhee."

Sarah, Leave it to you to get all the details. Now I'm more primed than ever to see the show. I just hope the theatre will be in good repair and there won't be any stragglers, or stranglers for that matter.

oh, the lights, the magic, the music, the drama! only for loops.

Oh sure, BOF, Jim J. rocks! I love him! If I had been closer to him, I would have said 'hey' to him becuase he's from my hood. I was in school with one of his cousins.

Thanks for the great summary! I really wish I could get back to NYC to see this.

I'll have to survive on City Center memories for the time being.