Kiss of the Spiderwoman at the Signature 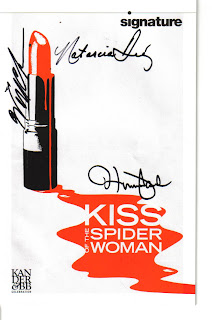 I have been a fan of the original cast recording and of all of the youtube clips for a while. Seeing the book with the music performed, I realized that this is a great show. It gave me chills from the onset. It's a profoundly sad story, but it's funny as well. This production is very dark and at times, noisy, which I suppose is like a real prison. The lighting was stunning. Aurora, the spiderwoman, is a fabulous character and Natascia Diaz played her fabulous. She didn't try to emulate Chita as her hair and costumes were completely different. But, she danced just as beautifully as Chita. Her songs were in her lower register, which is deep and rich. She looked so beautiful and glamorous, like a real 1930s movie star. I loved Will Chase. He's so good looking and his voice is gorgeous. His characterization of Valentin was terrific. He played him strong and angry, but the softening feelings toward Molina were played with subltety and tenderness. I really believed that even though Valentin needs to use Molina to get help for his cause, he did love him. Hunter Foster was great as Molina, the gay window dresser. I thought he played him with enough cliché without going over the top. He's a comedien so the funny dialogue and acting seemed natural, but I found his performance very touching and my heart broke for his character.

It was such a treat to see a production at The Signature. My friends Wanda and Cordelia are subscribers there and are often raving about the shows that they see there. Often times, I wished I had been there as well. Sondheim is on the board there even. It was an extra special treat to see the Kander & Ebb collection displayed there. I'll be going back in May to see Chita and George Hearn in The Visit and I'm already counting the days.
at 8:24 AM