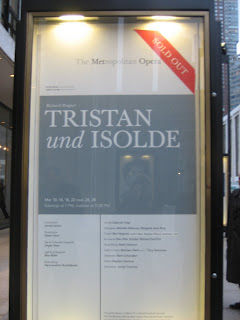 What a headache! No, I don't have a headache, but I bet Gary Lehman, Tristan, does. At the top of the third and final act, the pallet he was laying on started to suddenly slide the down the steeply raked stage at a fast speed. He slid about 12 feet until his head slammed into the prompter's box. The audience gasped, some screamed, and his co-stars and stage managers ran to his rescue. It was very frightening, but after about ten minutes, he shook it off and the performance resumed. Before that and after that, he gave a beautiful performance!

That was in the eleven o'clock hour! Whew. I made it. I do not know how the performers make it though. Overall I really enjoyed it, despite the ultra dull set and costumes. Deborah Voigt, Isolde, was playing an Irish princess but was costumed in what looked like a Kente cloth robe. Poor Michelle DeYoung, as Isolde's maid, Brangäne, was wearing a grey tent-like robe. I know she was playing the maid, but still. The supporting male players looked like they were Japanese war lords. BUT the music was absolutely gorgeous and the voices were glorious. I didn't find it dramatically intense like Jenufa, but it was impressive in sound and length. I liked the story and the action, although very slow and drawn out, was interesting - lots of stage kissing between Isolde and Tristan, but, of course, this was after they were tricked into drinking Love Potion No. 9. Unfortunately, I nodded off in the middle of the third act after about five hours in my seat. Fortunately, I woke up in time for Voigt's Liebestod. Thrilling! I noticed that the clock in Dante Park read 12:40 a.m. when I was heading for the bus stop. I'm ready for some more Wagner, but next time I'll take a nap first. 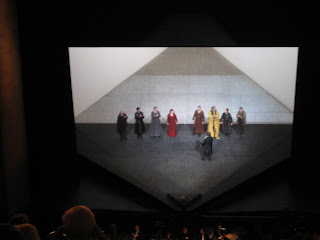 wow -- operatic drama. i'm glad you all survived it.

Wow! this production is riddled with bad luck. Kinda bummed this weekend is full of Easter festivities - who knows what will happen during the HD broadcast!

Exactly, Chelsea, I was just thinking the same thing! Could anything else go wrong with this production? I'm just so glad everyone is safe! Great report, as always, Sarah!