The Value of Theatre 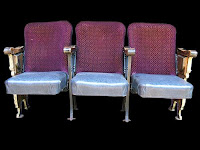 I join Steve at Steve on Broadway and Esther at Gratuitous Violins in their solidarity with Theatre Forte in their quest to define the value of theatre. I have to go to the wisdom of Stephen Sondheim for my definitive answer:

"[T]he excitement of theatre is ephemeral that one evening; that what you know instinctively when you're in an audience, unconsciously at the theatre is this performance is unique, it's got the same cast that was there last night and will be there tomorrow night, but tonight is unique, the laughs are going to be individual, something may go wrong on the stage, a prop may fall over, somebody may fall in the orchestra pit, something is live, and there is danger, and something also that makes it that it's being performed just for you..."

From the 2005 Museum of Television & Radio Conversation with Stephen Sondheim.

As you can tell, I am constantly pursuing entertainment in many forms, but the value of live theatre, whether it is at the Metropolitan Opera, a Broadway house, or a tiny room somewhere downtown, is much more than just being entertained. To me personally, being communed with an audience in a dark room, collectively focused on action on a stage, is an opportunity to escape from reality, a time to be transported to another world, for a lifting of my spirit. Because of theatre, I have met my best friends, have enjoyed endless hours of fun, have met amazing people and have learned a heck of a lot about the human condition but mostly about myself. I just can't get enough.
at 4:37 PM