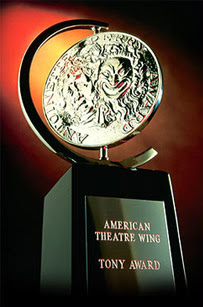 In just 47 days, the Tony Awards will finally be here. The first Tony Awards were held in 1947 and are run by The American Theatre Wing ("Wing") in conjunction with The Broadway League. But before the Tonys, the Wing was started in 1939 by a group of women who were active in Broadway theatre, both as actresses and patrons. Notably, one of those women was Antoinette Perry, for whom the Tonys are named for. Among other things, the Wing was responsible for starting the Stage Door Canteen, which entertained troops during WWII. After the war ended, the Wing established scholarships (even Angela Lansbury earned one) and began a seminar series. The Wing still focuses on education and scholarship, both on Broadway and beyond. In promoting education, the seminars that began in the 1940s, still continue today through interviews on Downstage Center and panel discussions on Working in the Theatre. Downstage Center is presented in collaboration with XM Radio, but can be heard either as a podcast via iTunes audio podcasts or directly on the Wing's website. The lineup of talent is extraordinary, everybody from big stars to the people who make theatre happen. In New York, Working in the Theatre is presented on Cuny TV, cable channel 75. The show focuses on anybody who works in the theatre, sometimes a panel of diverse actors, both veterans and those just starting out, and sometimes of actors and/or creators of specific shows. Fortunately for those outside of New York, the Wing has provided that these videos be available via iTunes video podcasts or directly through the Wing's site. These programs have not only entertained me, but have enhanced my passion for theatre by increasing my knowledge and appreciation for the creation of theatre.

(By the way, an upcoming episode of Working the Theatre will be devoted to the crossroads of theatre and opera. Afterall, the Met's new ad campaign has included the words "It's great theatre." To anybody who says that opera isn't theatre, then I say you haven't seen opera.)
at 7:17 AM

As I've mentioned before, I'm a huge fan of the Downstage Center podcasts. I'm slowly making my way through them all. The interview with Marian Seldes is especially terrific. I just wish they'd include the song clips on the podcasts. You can hear them on the XM Radio version (I think) but they remove them from the podcasts, probably for copyright reasons. And I just started watching Working in the Theatre. There was a great one with some of the cast from "August: Osage County." I'd actually started listening to Downstage Center before I went to Broadway for the first time. And you're right, they've definitely enhanced my enthusiasm for the theatre.