A Little Night Music: Quick! Send in the Producers! 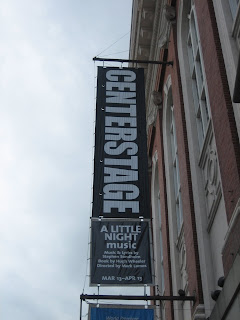 It's a good thing we waited to see A Little Night Music until this last weekend. Otherwise, it would have meant multiple trips to Baltimore for more helpings. Director Mark Lamos has achieved a beautiful, thoughtful and equally funny staging worthy of this glorious romantic musical comedy by Stephen Sondheim and Hugh Wheeler (the same brilliant team that brought us Sweeney Todd). This regional production was so perfect it might as well be in the running for a Tony for Best Revival. It completely satisfied all of my senses. I found it visually breathtaking. There was no curtain and the proscenium was literally framed in golden guilt giving me the feeling that I was taking in a beautiful impressionist painting. The romantic mood was set by Robert Wierzel's lighting, Riccardo Hernandez's scenic design and Candice Donnelly's gorgeous costumes. It's more than romantic though; it's downright sexy. Almost the entire female cast appeared at one time or another in elegantly vintage undergarments which were evocative without being overly revealing. All of the costumes were elegant and rich in sumptuous and flattering colors. The Liebeslieder Quintet was perfect. They danced and sang beautifully. The supporting cast of Mattie Hawkinson as Fredrika, Polly Bergen as Madame Armfeldt, Maxwell Caulfield as Carl-Mangus were fine although all each seemed to struggle vocally, both in song and lines. I will say that Maxwell looked the part as he is quite strapping. Unfortunately, Polly's Liasons was significantly cut for some reason. This was my only disappointment of the entire afternoon. The other supporting cast members, Josh Young as Henrik, Julia Osborne as Anne, Sarah Uriarte Berry as Petra and Kate Baldwin as Charlotte gave star turns, completely nailing their roles, each threatening to steal the show at any moment. Stephen Bogardus as Fredrik was handsome and sang the role perfectly, delivering lines with perfect comedic timing. By far, the most satisfying and thrilling performance was delivered by Barbara Walsh as Désirée. She looked absolutely stunning and wore her wigs and costumes very well. She delivered Hugh Wheeler's lines perfectly wry, her lower speaking voice taking over. Her presence was commanding, but she broke my heart as well. She conveyed disappointment and vulnerability when she sang the venerable Send in the Clowns so strongly that my heart was breaking for Désirée. Rarely do I cry, but I couldn't stop the tears of joy when Désirée and Fredrik found their happy ending. No doubt, this masterpiece will remain in my memory.

Now, there has not yet been a revival of A Little Night Music in New York. There have been some raves for productions elsewhere. Why hasn't this show been brought back to Broadway? Is a producer out there holding out on us? I heard tell of one keeping it in her vault until Glenn Close becomes available. Really? I hope not, but even that would be welcome over none at all. Surely there are a number of actresses of a certain age who would give their Equity Card at the chance to play the inimitable Désirée Armfeldt. I can imagine that Barbara Walsh wouldn't bat an eyelash at the announcement of a move up from Baltimore to the Broadway. As for Madame Armfeldt, I would hope that said producer would take up Angela Lansbury's offer at taking on that role. Who asked her anyway and won't they follow up on that question? How about a limited run at the Public, Encores Summer Stage, MTC or Roundabout? Any old place will do. In May 2006, almost two years ago, I had the opportunity to speak with Mr. Sondheim. With unprecedented composure on my part, I asked him, "But, Mr. Sondheim, what about a revival of Night Music?" His reply, "Well, actually there has been a lot of talk and I think it's going to happen." He went on to tell me that Angie would be perfect in the role of the "old lady" which of course was music to my ears. But when? I am still waiting and hoping, always hoping. Will it be the Center Stage production? There's also a semi-staged concert this summer with the Boston Pops featuring the effervescent Christine Ebersole and Mary Louise Wilson, together again as mother and daughter. Whatever happens, I hope a production is sent into New York sooner than later and you will all be the better for seeing this perfect musical comedy.
at 7:46 AM

I know I'm biased, but I think LCT should take it on, what with their spare-no-expense attitude on classic revivals; we'd have full orchestration intact, sumptuous scenography and a glorious evening - and a brilliant space for such a farce as it were. I am glad you enjoyed it. We'll have to see what gives with the rumored Chocolate Factory production and what happens when the Beales attack Sondheim this summer. It's such a gem.

Saw it today and loved it!

aww I'm so glad you ladies had such a nice time and I'm quite jealous!! Here's hoping that someone's smart enough to revive it!

omg! you were in baltimore!! do you believe I got a call to audition for that production, and I couldn't make the auditions!

It would have been fun to meet you...