All the tales I remember from Camelot 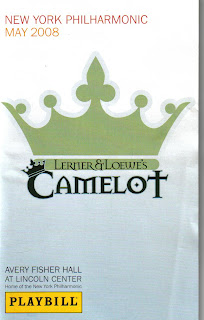 I worked on our Kermit High School production of Camelot. I think I was in the chorus. Did I also help with make-up? I think so. Anyway, Sheree Ferris was Guenevere and Eric Hindman was King Arthur. I can't remember who played Lancelot. I really only remember Sheree singing the hell out of The Lusty Month of May. Since then, I have loved the original cast recording. Its just divine - that voice of Robert Goulet on If Ever I Would Leave You and then Julie Andrews' I Loved You Once in Silence. Sigh. I bought my ticket to last night's Camelot thrown by the NY Philharmonic back in January. I anticipated that Audra McDonald would would be Guenevere and I cared little about the rest of the cast. But as the time finally drew near, my anxiety level grew and I feared that it would only be horrors of stunt casting. Fortunately, there was no reason for anxiety. Instead of Audra, it was Marin Mazzie and she was absolutely lovely and her voice equally so. Heretofore, I had only heard Marin in various one song appearances and of course on the dvd of Passion. I thought she was rather bland. But she was anything but bland as Guenevere. Of course, Nathan Gunn as Lancelot was fabulous. He's born to be on stage. I've loved him in operas (my favorite An American Tragedy and also The Magic Flute) but he seems like he would be the perfect leading man of musical theatre. Perhaps we'll see him in a revival of Carousel. I really liked Gabriel Byrne as King Arthur. He sounded a bit hoarse, but I loved his delivery. He had the perfect lilt and hesitation and bumbling for believable self-doubt. I absolutely loved the knights of the round table played by some of the best of Broadway's men, Mark Kudish (Sir Lionel), Will Swenson (Sir Sagramore) and Christopher Sieber (Sir Dinadan). These guys are comedy greats with voices that don't stop. The rest of cast rounded out by Christopher Lloyd (Pellinore), Fran Drescher (Morgan Le Fey), Stacy Keach (Merlyn) was adequate I suppose, at least enough to move the story. Overall it was an absolutely beautiful production, but that's thanks to the gorgeous score by Music by Frederick Loewe played by New York Philharmonic and fabulous lyrics by Alan Jay Lerner sung by those gorgeous voices. Lonny Price's direction was a mess. Irritating dancers dressed all in red moved boring boxes around the stage and he didn't know what to do with the chorus. They would have been more affective just lending their voices as seated from risers or standing as a choir. However, I enjoyed the production so much that I was barely distracted by the woman next to me who flossed her teeth or the woman behind me who sang along and then stomped her feet and clapped during Guenevere. Audience members, can't live without them, can't live with them...
at 9:27 AM

Glad you semi-enjoyed your time there.

And Marin - Aren't you familiar with Ragtime? If not, I implore you to seek the cast recording ASAP. Back to Before is one of those songs...that makes my heart skip beats.