For Stritchay in Endgame: All the way to Brooklyn with little ado 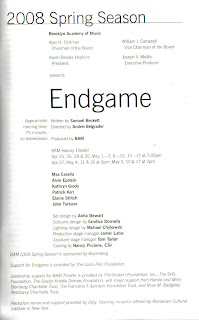 Kari and I traveled all the way to BAM to see Elaine Stritch in Endgame. She was in it only briefly and I would have been more disappointed if the rest of the cast - Max Casella, Alvin Epstine and John Turturro - had not been so brilliant. At least they seemed brilliant although I had no idea what the hell they were talking about. I found myself laughing at delivery rather than meaning. The best part was taking a cab back that only cost $23 plus tip - I feared that it was going to cost over $100. Whew, I survived in more than one way. I think I'm glad I saw a Beckett play. It's sure as hell better than Pinter's The Homecoming even if I understood it a million times less.
at 7:56 AM

I'm glad you had a good time and a good trip to and from Brooklyn! I'd like to get to BAM someday. They always seem to have interesting things going on.

That's kind of the way I felt about Macbeth. Patrick Stewart might have given a brilliant performance, if only I'd understood more of what he was saying!

I used to read a lot of theatre of the absurd in high school, like Beckett, Ionesco. I wasn't sure what they were about, but I felt very intellectual for reading them! I would like to see "Waiting for Godot" someday.