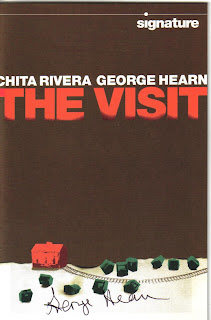 The Visit is based on Friedrich Dürrenmatt's 1956 play of the same title. It premiered on Broadway in 1958 and starred Lynn Fontanne as Claire Zachanassian and Alfred Lunt as Anton Schill. It was produced as film in 1964 and starred Ingrid Bergman as Claire and Anthony Quinn as Anton. It has been revived twice on Broadway, in 1973 and again in 1992. I have seen the film and found it creepy yet heartbreaking and fascinating. Sometime before 2000, producer Barry Brown pitched the idea for a musical of the play to lyricist Fred Ebb, composer John Kander and bookwriter Terrence McNally to be written for Angela Lansbury. This was a sure recipe for success. The project progressed and Angela even recorded a demo. It was headed straight for Broadway when, sadly, Angela withdrew to care fulltime for her dying husband. Enter Chita Rivera. In 2001, director Frank Galati and choreographer Ann Reinking joined the team and Barry Brown produced the effort for the Goodman in Chicago. John McMartin starred as Anton. The show only garnered mixed reviews and despite talk for a move to the Public in New York, still with Chita but replacing John with Frank Langella, it wasn't able to get the backing it needed.

Now seven years later, magic has happened. A few new songs were added (before Fred Ebb's death in 2004), some staging and choreography was reworked. Terrence McNally revised his book. This time it's at the not-for profit Signature Theatre in Arlington, Virginia. Chita is still with the show as Claire, but the rest of the cast is different, notably replacing Anton with two-time Tony winner George Hearn. The effort is a result of a truly brilliant story told through song. It captures the dark humor of the original play. I knew what would happen because of the film, but I was still on the edge of my seat via this heartwrenching telling. Reinking's choreography is subtle, at times gorgeous, at times hysterically funny. The music is haunting and tells the story with clever lyrics. Chita wore the part of Claire, the world's richest woman, like a queen, gracefully sweeping along the stage at a pace that made everybody stare in awe. She's a celebrated dancer and it shows in her presence, but she only gets one number to show off her moves. It's in her subtle looks that at times convey hurt and anger or disdain that makes this her best venture as a singing dramatic actress. George Hearn's Anton was humble and hopeful, yet fearful, rarely remorseful of the crime that he was accused of in his youth. Finally, he accepts his punishment for justice and love. His voice is astounding and it was as if he was born to sing these Kander and Ebb tunes. The most hauntingly beautiful song of the evening, You, You, You was sung as almost as twin soliloquies with a pas de deux featuring dancers a younger Claire and Anton. It was both visually and audibly breathtaking with the very distinct voices of Chita and George. The bonus of the evening was Mark Jacoby as the town's self-important mayor and Jeremy Webb as the guilt-ridden and reluctant schoolmaster. At times, the supporting cast seems campy, in both song, dance and costume, but it merely lends to the ridiculous and sad revenge that Claire seeks against Anton.

Overall, this love story is cerebral, intimate, sad, shocking, funny, heartbreaking and above all, beautiful. It's the perfect adult musical and nobody does dark comedy better than Kander and Ebb. The stage at the Signature was in the round so my first thought for a Broadway transfer would be the Circle in the Square, but somehow I can't imagine that Chita's presence wouldn't overwhelm that space. I know it will work in any theatre, but my choice would be the Lyceum. The Visit officially opened last night and runs through June 22, 2008. Although most reviews have yet to be inked, if Variety's rave is any indication, this is a regional hit with a Broadway transfer just around the corner. 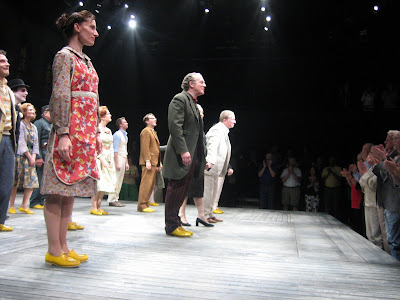 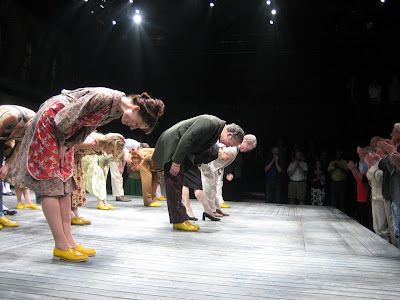 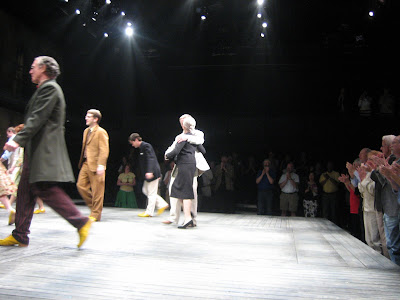 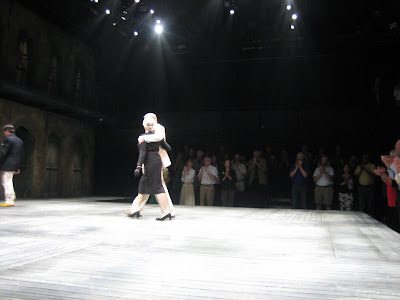 gurl how did you get those photos, you make me paparazzi proud@