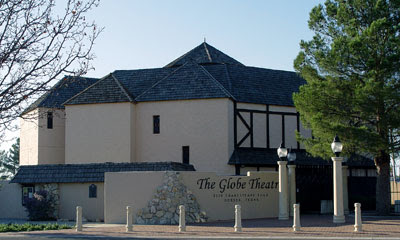 At Tuesday's Theatre World Awards, Deanna Dunagan talked about her picture being published in the 1974 Theatre World Book for a production of a Shakespeare play that she did at the Globe Theatre on the campus of Odessa College in West Texas. I may be one of the few people outside of West Texas who knows about the Globe. It's an authentic replica of the real Globe Theatre that was built in London in 1598. In 1948, the Odessa High School Shakespeare Club decided that they needed their own Globe and so it was born. It's officially known as The Globe Theatre of the Great Southwest and productions finally began twenty years later in 1968. I saw my first Shakespeare there when I was twelve years old. It was The Tempest and it was absolutely wonderful. I can still see the actors running around us and through the aisles. So when Deanna shouted out the Globe, I simply couldn't help myself. I was the only dope who applauded in the house. It was involuntary of course! The word "Odessa" isn't said very often in this part of the world unless you're in Brighton Beach and it's a reference to the Odessa in Russia. But, Deanna laughed, "Oh you know it!" You bet I do.
at 8:49 PM

I worked at the Globe that year with Deanna in The Scottish Play, Imaginary Invalid, and Twelfth Night. We also performed together in a bizarre production of The Bald Soprano there that I'm sure we'd both like to forget. (I was also probably in The Tempest you saw at the Globe...1973?)

Deanna and I later both worked in Dinner Theatre out of Dallas, appearing in THE RAINMAKER (She was a brilliant Lizzie) with James Drury and in THE SILVER WHISTLE with Don DeFore.

Deanna is probably the best actress I've ever worked with. I delighted she won the Tony!