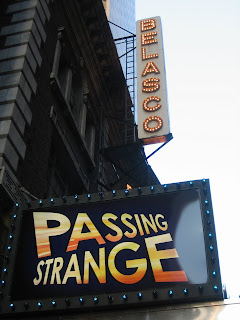 So,Passing Strange. It's not exactly a musical. But it's definitely theatrical. And there's really, really, really loud music. However, I liked it overall. At the advice of my Benefactor to just sit back and relax, I opened my mind and just listened for the story, which I understood to be biographical about a man name Stew, who not only stars on stage, but also wrote the book and lyrics. And the story's there all right, amidst the intermittent noise, and it's a great story about Stew's search for reality and himself, finally just growing up whether he wants to or not and realizing what the truth is. The music is interesting. It's not for the faint of heart though. At times it was the worst noise I've ever heard and I thought for sure that my ears were bleeding. Sometimes the lyrics were only sex, drugs and rock-n-roll, bordering on the offensive with expletives and explicit imagery. But at other times, there were some songs, actual songs, and I thought this is great music, even being this loud. The first act was entertaining, a teenager begrudgingly adhering to his single mom's wishes to go to church and discovering an underworld there, but it didn't have me until young Stew, played by Daniel Breaker named "Youth", made his way to Amsterdam and found a community to belong to. This was when the good music, although still unbelievably loud, started - Amsterdam and Keys, presented by an interesting De'Adre Aziza as "Marianna", and a reprise of Amsterdam which was practically the 11:00 number at the bottom of the first act - so great that I thought the show might be ending. However, that was too easy and so Stew breaks with his community and moves on for something worse in Berlin. The audience was laughing at things that I thought were just horrible and sad and not funny at all and the Berlin sequence just about did me in at the top of the first act that made the first act seem light-hearted. I wanted to yell out to Stew, "GO BACK TO AMSTERDAM!" I regretted not leaving with all the many audience members who bailed during intermission (Dina Merrill and her crew!), but I wanted to see what happened to Stew. Yes, the story was that interesting. I realize that this was an autobiography, but this part of the story was the worst, especially in music, but then there was a new relationship with "Desi" played by the terrific Rebecca Naomi Jones, and things settled down and became interesting again. Stew's journey made me wince, but in the end I understood it. He came to understand and accept the truth and reality of home instead of running away to Amsterdam and Berlin and it ended on a great note, figuratively and literally. If it wins a Tony on Sunday, it will deservedly be for best book. Daniel Breaker should win for best featured actor as well. He's pretty amazing. I'm glad my Benefactor insisted that I see it and I thank him. It's a challenging and interesting piece of theatre, which is at times fun and entertaining. Unfortunately, I'm suffering from post-rock concert tinnitus this morning.
at 6:16 AM

Hey Sarah,
Great review! I agree with you about being challenging and interesting.

I do agree with you about the sound - it was a bit loud for me, too. Although luckily, I wasn't feeling it the next morning. I also agree with you that Daniel Breaker is amazing. He's so appealing, and he does so many nonverbal things - just the way he slouches in a chair. And there are some very beautiful songs. (I wasn't offended by the lyrics but it could have been that I didn't hear all of them very clearly!)

I like stories about journeys to begin with. I liked the sly references to The Wizard of Oz, the way Youth sees the same people playing different roles at different parts of his life. There's a lot of very witty, perceptive dialog about race, about stereotypes, about the limits of acceptance among people who are supposedly your friends. And the way he skewers the radicals in Berlin is pretty hilarious.

When I left the theatre, my reaction was, "Well that was different." I liked it, but I didn't think I needed to see it again. It has grown on me as I thought more about Youth's journey, about the way Stew put the story together, and I do like the music, especially "Baptist Fashion Show," "Keys" and "Amsterdam." But in the end, I respect and admire Passing Strange more than love it. It didn't grab my heart the way In the Heights did.

Granted I haven't seen it yet but best supporting actor? Better than Gaines?!

First of all thanks for the link! I left a special post on my blog giving you a shout out. :-)

Secondly, I understand some of your frustrations with Passing Strange. I too found the show very interesting: an involving story with some appealing songs. However, like Esther says, I do admire it more than I like it. I think it is a strong piece of theater and is the second best musical to bow on Broadway this past season. In the Heights still is my numero uno.

Oh, and I, too, loved Daniel Breaker. I mention on my Tony 'should wins' that he's second only to Gaines in my book. Any other year, this would have been his time IMHO.