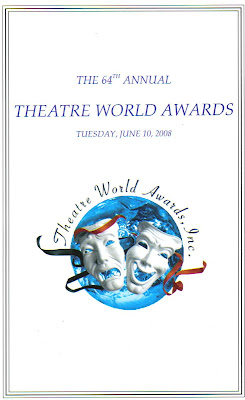 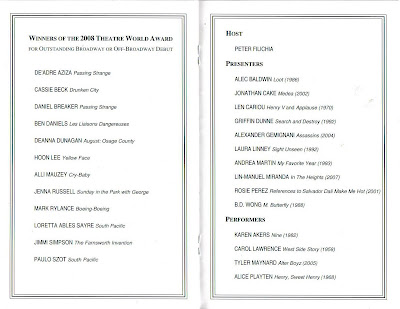 And yesterday I skipped work for the Theatre World Awards for a third year. Attending is fast become a lovely annual tradition that I share with my Noah and that aficionado of theatre, Kevin. It was Noah, after all, who called me in 2005 and told me to get my butt over to Studio 54 for the awards. That was the first time I met Kevin too. Good grief, what an afternoon that was. John Cullum sang a song from On a Clear Day You Can Sing Forever, Lucie Arnaz sang a song from They're Playing Our Song and Pat Suzuki sang I Enjoy Being a Girl from Flower Drum Song . I'm lucky enough to knab an invitation from the that Walking Encyclopedia of Musical Theatre, Peter Filichia. Peter has hosted the awards for eleven years now, after taking over the role from John Willis, one of the founders. John, along with Daniel Blum and Norman McDonald, founded the award to recognize twelve "Promising Personalities," i.e. debut performances on Broadway. Eventually, the award would include off-Broadway performances as well. This year, the debuts were maybe more unusual - three were Brits, one was a Brazilian opera singer, one was a Hawaiaan Chic Singer, and one who toiled in regional theatre for over thirty years and is only now making her Broadway and New York debut. The recipients were de'Adre Aziza for Passing Strange presented by Rosie Perez, Cassie Beck for Drunken City presented by John Cullum, Daniel Breaker for Passing Strange presented by Len-Manuel Miranda, Ben Daniels for Les Liaisons Dangereuses presented by Laura Linney, Deanna Dunagan for August: Osage County presented by Alec Baldwin, Hoon Lee for Yellow Face presented by B.D. Wong, Alli Mauzey for Cry-Baby presented by Andrea Martin, Jenna Russell for Sunday in the Park with George presented by Alexander Gemignani, Mark Rylance for Boeing-Boeing presented by Jonathan Cake, Loretta Ables Sayre for South Pacific presented by Griffin Dunne, Jimmi Simpson for The Farnsworth Invention (unable to attend) and Paulo Szot for South Pacific presented by Alice Playten. Carol Lawrence was on hand to perform a fast paced three minute medley from West Side Story, Tyler Maynard reprised his “Epiphany” from Altar Boyz and Alice Playten channeled the "Little Sparrow" with L'Amour (No! We wanted Nobody Steps on Kafritz from Henry, Sweet Henry!) The award is more of an summons to joining the family of previous Theatre World Award recipients. Everybody is more than appreciative and cannot talk enough about the feeling of welcome and community that they encounter when they are working in New York theatre, more than any other theatre district in the world. It's very special to witness the presentations, given by past recipients who mostly have a direct connection to their presentee, and acceptance speeches and be included as a part of this community. I told Peter, "All the actors always talk about the sense of community that Broadway offers and I would like to add that dedicated patrons like me feel included in that community. It's a great feeling." 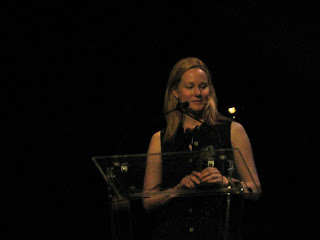 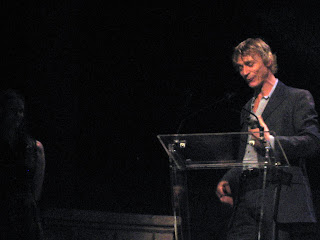 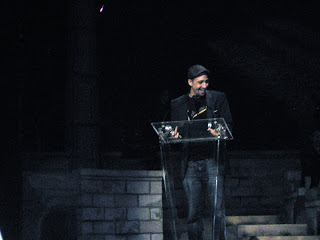 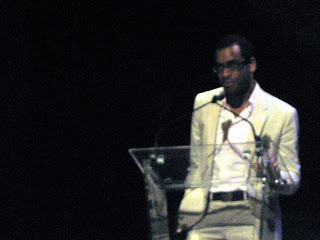 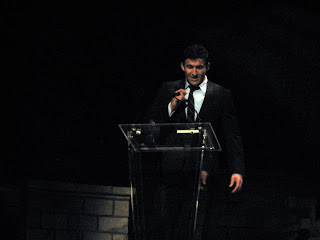 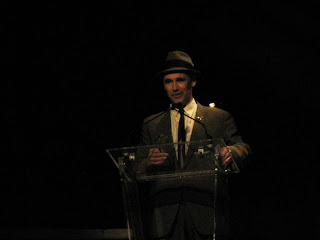 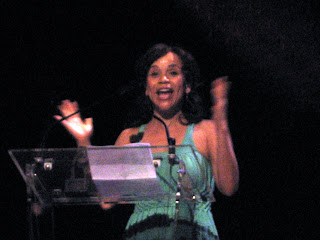 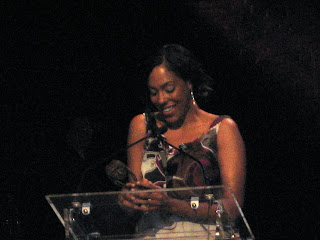 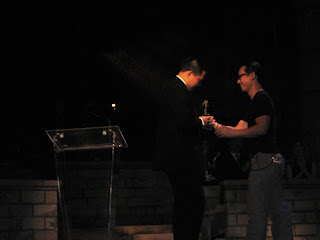 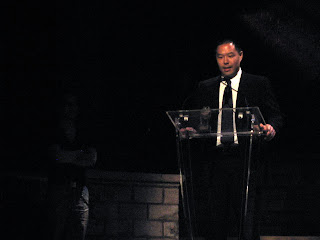 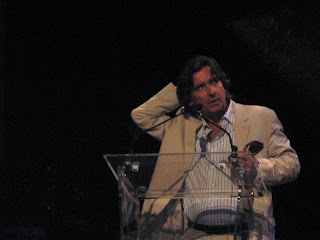 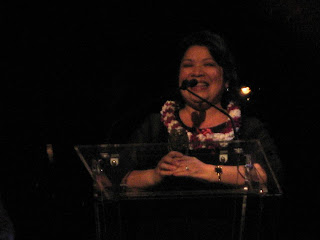 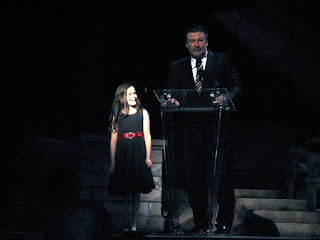 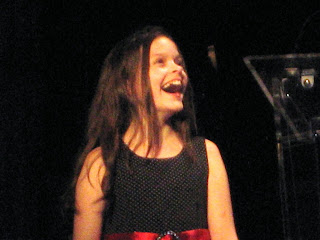 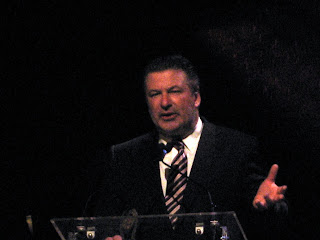 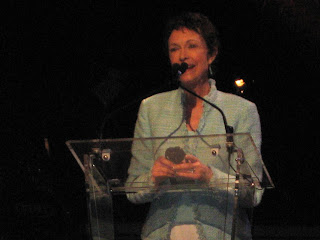 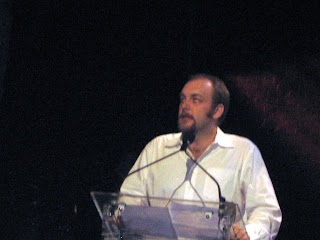 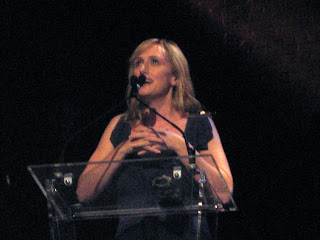 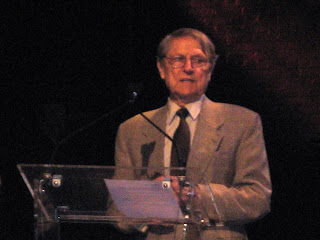 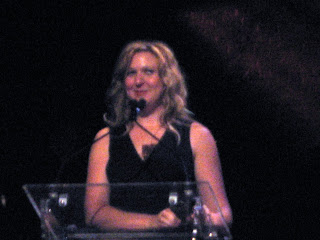 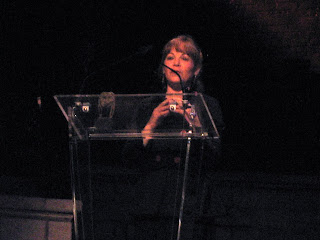 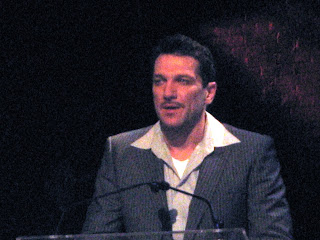 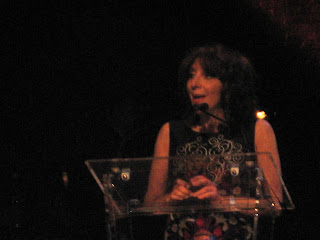 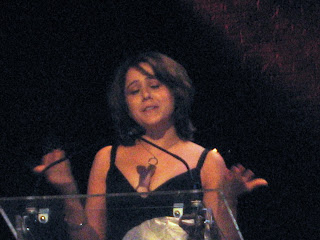 This are great. Love LL. Are you going to the Tony's or watching with your friends. I am waiting to be credentialed, hopefully I will hear by Friday like promised.

thank u for telling me aboat the theatre world awurds. listening to dolores gray now. shez almost as good as idina menzel. i am quickly lurning.