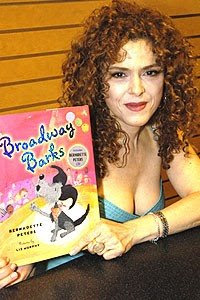 Bernadette Peters will be signing copies of her New York Times Best-selling book, Broadway Barks, in Shubert Alley today at 12:30 pm. Previously she was to sign just inside double glass doors, but for logistic reasons, she will be located under Junior's awning instead. You can't miss her!

The book is about the journey of a dog found in Central Park who finds his way to Shubert Alley to become part of the annual event. Included is an exclusive CD which features Bernadette reading the story and singing an original song for which she composed the music and lyrics. Bernadette's royalties from the sale of the book will go to the charitable organization, Broadway Barks. This year Broadway Barks celebrates its 10th Anniversary and will be held beginning at 3:30 this afternoon.
For more information about BROADWAY BARKS 10, call (212) 840-0770, extension 477, or visit www.broadwaybarks.com


(Photo by Jenny Anderson of www.Broadway.com. Bernadette is posing with the book I purchased for my niece Cara!)
at 5:15 AM

Love the photo and only wish YOU had taken it. Oh well. Arf! Arf! Roof! Roof! and a Bow-wow!