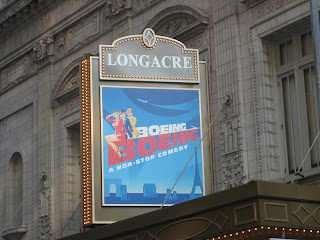 Just like a Boeing jet, Boeing Boeing is sleek and fast...and is jet-sized fun! I finally saw this winner of the 2008 Tony for the Best Revival of a Play yesterday afternoon. Even before the curtain opened to a beautifully stylized set, I was hooked. French translations of late 1960s pop music playing over the sound system, set the mood for fun. The set was gorgeous - a dream apartment for me - with mid century mod furniture and light colors and the costumes were sexy and popped with color. Every line was delivered with precision and humor without playing at us and it seemed like the actors in this very ensemblic piece were having a good time too. I loved Tony winner Mark Rylance. He's so perfect as a comic, that it's hard to believe that he's a British classical actor. Christine Baranski continues to be one of my favorite comediennes in her turn here as a French maid. Bradley Whitford, Gina Gershon, Kathryn Hahn and Mary McCormack are all very funny as well. I was so surprised by Gina Gershon, because I had only considered her a b-movie actress, but she's perfect as the Italian air hostess. Kathryn Hahn and Mary McCormack give hold your sides funny performances. I have never seen anybody as funny as these ladies on the stage. Bradley Whitford was so good that he almost succeeded in making me feel sorry for his sleazy character's predicament. The audience just about had the most fun you can have in a theatre and was engaged every minute. After Mark's character made his ultimate decision, there were loud "awwws" from the audience which made everybody laugh even louder. Even the curtain call was one of the best and most fun I've ever seen. If you haven't seen Boeing Boeing, book your tickets right away and fly right in.
at 7:24 AM

Glad you got to see it, and that you enjoyed yourself. Yeah, it's a corker, all right. I liked it even better the second time. Perhaps it was because Katherine Hahn and Mary MacCormack had really grown into their roles, or maybe it was that I knew what to expect and was on board to have a good time. And have a good time I certainly did.

You've got to describe the curtain call! I love going to see performances where you can tell the audience is completely into it. I hope this comes to Houston.

Margo - you know I want to describe the curtain call, but it was such a wonderful surprise that I don't want to spoil it for anybody else!