First Preview of [title of show] 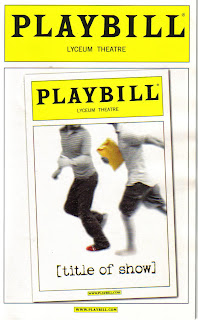 [tos]sers were out in droves tonight at the Lyceum for the first preview of [title of show]! It was a more than appreciative audience - laughing, applauding, cheering and screaming at every opportunity. The book is updated as are some of the songs but overall, it's the same fantastic show that it was down at the Vineyard two summers ago. They played to all 950 seats tonight. Imagine, down at the Lyceum, there were only 120 seats. 120 seats! What a night for writing team and stars, Jeff Bowen [music and lyrics] and Hunter Bell [book] who started this musical as a writing exercise, took it to off-Broadway, grew it into a youtube phenomenon and are now realizing their dreams of seeing it on Broadway. Susan Blackwell and Heidi Blickenstaff, who round out the cast are better than ever. Even musical director Larry Pressgrove had a fan base there. It's a 90 minute show, but tonight it was more like 115 minutes due to all of the long applause. After "Nine People's Favorite Thing," which is near the end show, there was a thunderous standing ovation - probably a minute long. It was a fairly young crowd - as Little Love pointed out, every Theatre Kid in America is going to want to see this show. Thank God, I'm a Theatre Kid too. 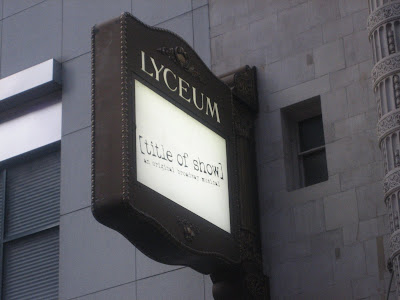 Love that Playbill. How perfect!

Just bought tickets to see it on broadway. I've seen it 4 times off broadway and I hope this is even better.

For anyone who doesn't know check out http://www.broadwaybox.com/shows/title_of_show_nyc_tickets.aspx for a discount code that gets you 50% off.