She's so downtown, and funky, and sassy.

It's Time Out for Susan Blackwell in the July 17-23 issue of Time Out New York. She just made her Broadway debut on Thursday night in [title of show] at the Lyceum. Since I became aware of Susan Blackwell when [title of show] was playing down at the Vineyard, I had this feeling that she is a perfect compilation of some of my best friends - so damn funny, always on her toes, quirky and unafraid of anything. Or at least her character is. But is she playing herself? She professes, "[the version of herself that she plays onstage] is a distillation. I'm quite a quiet, introverted person." Did you know she co-wrote her big song, "Die Vampire, Die!"? I didn't realize it. She says, "It's something that I still have to go back to myself, because I'm filled with doubts and insecurities about many parts of my life." I say that the onstage Susan, at least, is everything you want her to be. I have a feeling that the real Susan is too. 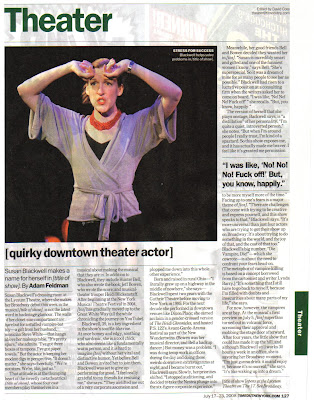