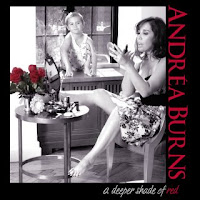 I first became aware of Andréa Burns on March 19, 2005, when she sang Someone Woke Up at Wall to Wall Sondheim. She was in the first group of Broadway singers in that twelve hour day. I was blown away by her voice and I can still see her walking out quickly, belting it out with a big smile and then leaving almost as quickly as she came. Unfortunately, she disappeared from my radar except for her track on my W2W radio recording. Then much to my delight, I found her again earlier this year playing the supporting role of sassy salon owner and neighborhood gossip Daniela in In the Heights. My first thought was that she looked familiar and then I realized it was her. My second thought was that she is really versatile. I love her mature voice. She knows how to bring tenderness or humor, but she sparkles with a fantastic belt too - evidenced by her Carnaval del Barrio in In the Heights. It's my favorite kind of voice and she knows how to deliver a song, full and pretty without all of the ornamentation that just gets in the way of the lyrics. I was so happy to get her solo album A Deeper Shade of Red. It's filled with beautiful songs - a lovely renditions of the classics Chelsea Morning and Up on the Roof . My favorites are a joyful What More Do I Need?, my Sondheim favorite from Saturday Night and an interesting and gorgeous compilation of Man With the Child in his Eyes/Something Wonderful. The latter is from The King and I and I never thought of it as a pull out song, but she brings it home. A Deeper Shade of Red, released by and available at PSClassics, Amazon and of course, iTunes.
at 8:05 AM

Please tell me you have "Songs for a New World." She's awesome in that, too.

I don't yet but you can bet it's in my shopping cart!

You're in for a treat!

Sarah, Sorry for just now catching up. I first learned about Andrea Burns talent by taking in the tour of Parade years ago. In addition to her work in In The Heights, she has amazing dramatic chops. I would love to see her take on Eva Peron.