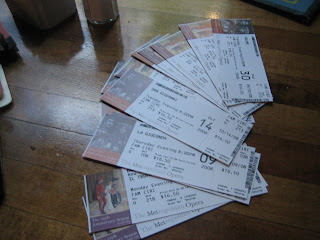 I feel the need to explain the reason for the opera ticket buying frenzy to my friends who don't go to the opera (although I hope they will accompany me in the near future - you know who you are). Here's the deal. This season at the Met lasts from September 22, 2008, until May 9, 2009. In New York, there's also the New York City Opera, but it is well known that I am a Met Opera Snob as I have heretofore avoided taking in an opera there. I feel like I don't have to settle for a shabby second when I've seen the best at the Met. Part of what is special about live operas at the Met is that they are limited - usually only eight to ten performances by singers who have a relatively short vocal life, versus eight shows a week for months on end on Broadway. It's part of what makes it so exciting to see favorite singers and thrilling performances but in order to do so, you have to get your act together in order to get a ticket. Now, getting a ticket is probably always possible - sold out or not - BUT - if you want a seat at a very affordable price that allows you to see many performances, once again, you have to get your act together. There are almost always seats available that range in price from $320 to $15. We choose to sit in $15.00 seats in the family circle for most operas for two reasons - first the obvious, the less you pay, the more you see, and secondly and even more important, the sound is exquisite at the top, even if you are very far away from the stage. The performances at the Met are not artificially amplified - no microphones - so what you're hearing at the top of the Met is the purist sound - the voice rises above the orchestra from a pit in front of the stage, to create marriage in heaven at the top of the house. Now, remember I said eight performances only. If you don't get an advance ticket and they are sold out, you can try to rush on week days (several methods - stand in line very early or if you're a senior citizen, call the box office) or you can join the cancellation line but of course, this is a risk. There is also a daily line to buy standing room tickets. I haven't done this because operas are long and I don't see the point in standing when I can pay just $15 for a seat. You have to get up and get to the Met early on a daily basis though because standing room tickets go quickly. Also, there are always people selling their unwanted tickets before a performance out on the plaza but, cash only and you risk being scalped or worse. I also know there are ticket brokers, but I am not willing to pay astronomical amounts of money for a ticket (Really? I know, I know, I've done it before). Our main motivation for getting our act together this season is for the opportunity to see Renée Fleming in Thaïs. There are still some tickets left, but they are going fast, i.e. there are only partial views left on Saturday, December 20th. There is no him hawing around when it comes to this Diva. It's not like waiting around to see Patti LuPone in Gypsy when you know there will be five more months of eight shows a week. Now, for anybody who wants to go, there are twenty four regular productions this year plus a Wagner Ring Cycle, plus the Opening Night Gala and a 125th Anniversary Gala. All tickets are now available at the box office, on the phone or online. I'd love to go with you so check your calendar against mine and just let me know when...if we can get tickets.
at 10:00 AM

I'm dragging a non-opera loving friend to Thais because I think that will help her to maybe get why I love opera/La Diva, but she definitely didn't understand why I was in such a hurry to get my tickets.

I am in awe. The cross-referencing of calendars, the waiting in line, all those adult beverages - all in the name of opera! I love it!

Thanks for your help via email. My week was so busy and hectic, I am eternally sorry that I was unable to contact you while I was in NYC. But I did do the GYPSY stage door and met Patti. Thanks for everything SarahB!

wow! just looking at those tickets.. they make my mouth water :P I wish I was able to go to an opera! Or go to New York City.. or both :P You're LUCKY!!! Tell Renee a random 16 year old from North Dakota says "HI!" :D