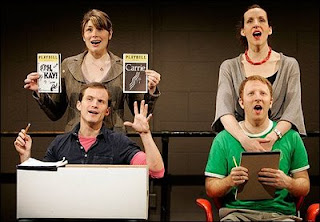 I scored some tickets gratis to see [title of show] again tonight. This is my third time to see it on Broadway and one thing is certain, I'm charmed.

Update: The orchestra was full with a fairly mixed audience. An elderly couple in front of us left during "An Original Musical", which is full of offensive language. I understand why they were offended - I don't like it either, but I get the point of it. Too bad they didn't stay to see where they take it from there. Larry Pressgrove was out, John was in. The cast called him John, but it was a little weird not seeing Larry at the keyboard. They were all better than ever and I think Heide is even fiercer than ever. It was obvious that there were [tossers] upstairs, but it wasn't terribly disruptive - just fun. We were sitting with people who had never seen it and obviously enjoyed it. I heard one man behind us keep saying, "This is really clever!" Indeed it is. I suggest you don't wait to see it - week day grosses have been low. Support your [tos]!
at 6:27 PM

Email ThisBlogThis!Share to TwitterShare to FacebookShare to Pinterest
Labels: [title of show], Broadway

WAAAHH! And I haven't seen it once!