Tonight: Hair at the Delacorte! 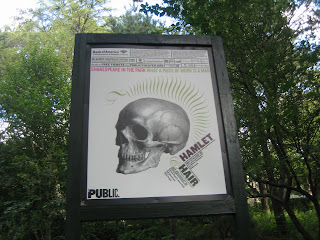 It's my first live Hair tonight. I'm really looking forward to the trip and it'll be even sweeter since I'll be with my friend Chris.

Update: Hair was everything I thought it would be: energetic, interesting, fast paced and raunchy. I didn't think it made any sort of social statement but just reflected what was going on in 1968. I think the shock value is gone but I can imagine that audiences seeing it for the first time 40 years ago must have been shocked. The nudity was brief and in the shadows, but the language was rough and sex, even implied, was rampant. It was very entertaining and moved quickly. There was very little dialogue and that seemed improvised. The singers were fine, although none truly stood out in the ensemble, except for the uber talented Patina Renea Miller, who started off the evening with a fierce and hair raising "Aquarius." There were a lot of young people present, probably still teenagers, based on their enthusiasm (sometimes irritating) and naivete (very irritating) and many of them were costumed in what they thought hippies should look like. They looked more like gypsies but they were having fun. The wonderful outdoor setting of the Delacorte, the lighting, combined with choreography, which was very easy, meaning not hard lines and precision, set the mood for a very enjoyable experience. I can't imagine how this show ever played on Broadway, but I guess the shock factor back then was enough to keep it open for tourist. Even now, I can't imagine it playing anywhere but the Delacorte or maybe down at the Public.

If you want to go, either make a donation to the Public or wait on line in Central Park. Get there before 7:30 a.m. because we heard that nobody after that hour has been getting in. Before 6:00 a.m., the line forms on Central Park West at 81st Street, then moves in to the park by the Delacorte. We hear that people are arriving around 4:30 a.m.
at 3:51 PM

Apparently, only people arriving before 7:30 am are getting tickets.