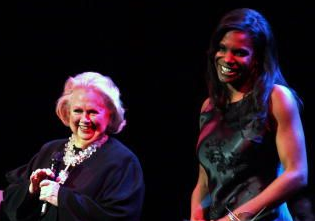 On Sunday night, my Little Love Noah and I went to the Broadway Voices for Change concert starring Barbara Cook and Audra McDonald at the Hirschfeld. The concert benefitted America Votes. I arrived in time to see Sarah Jessica Parker and Matthew Broderick getting their picture taken by their Prius. Sarah Jessica, looking ultra sparkley and glamourous, and Matthew introduced the evening, billed for America Votes. The message was clearly get the vote out for Obama. It was a packed house so we ran into various friends, and saw Harvey Evans and then Marian Seldes who said "Isn't this wonderful? I'm so excited to be here." The concert began about 30 minutes late. The musicians onstage were Barbara's small ensemble lead by Lee Musiker plus Ted Sperling, who played for Audra. Audra and Barbara began the evening with Sing a Song. Their voices blend in a heavenly way - Barbara's sweet soprano with Audra's strong mezzo - and it's story-telling at its best. I always have that feeling when I'm listening to Barbara sing, whether it's live or recorded. When Audra joins in, it just elevates to an emotionally thrilling level. The love between them doesn't hurt - it's teacher and student, mentor and mentee, mother and daughter. It's like they are singing for each other and the rest of us are just lucky to witness the love. The two divas alternated sets before more duets. Audra sang There Won't Be Trumpets from Sondheim's Anyone Can Whistle. She said it must have been written for Obama. She also sang I Wish I Were in Love Again, The Glamorous Life, What Can You Lose/Not a Day Goes By, When Did I Fall in Love, Can't Stop Talking About Him, Stars and the Moon (after which Barbara said, "I like that Stars song") and Lover, Come Back to Me. Barbara sang Sooner or Later (from Disney's Song of the South, Rainbow on my Shoulder, No one is Alone, Lost in the Stars/No More, Where or When, Nashville Nightengale. They reprised their Blue Skies duet from The Met concert. Audra kept changing the words appropriately to "Blue States." The surprise of the night was an appearance by Brian Stokes Mitchell. Audra began her introduction of him by saying, "I learned this song 10, 11, 12 years ago..." and then had to make it clear that it was Stokes and not Obama. They just about brought the house down with Wheels of a Dream which could not have been a better chosen song for the night. Stokes stayed on stage for some patriotic songs and then the entire theatre joined in on God Bless America. I'm feeling patriotic right now just thinking about it. The concert is in my Top Ten of all time and I can't get it out of my mind. It was emotionally overwhelming and I admit that although I wasn't on the fence about voting as a Democrat, I have been less than enthusiastic about Senator Obama. I know the point was to raise money and awareness to get the vote out, especially for Obama. The Voices for Change thing? That was for me. My heart needed to change. How appropriate that it took musical theatre songs to highten my awareness and enthusiasm and even muster my hope. Bring on November 4th.

Photo by Glikas/Film Magic
at 4:09 PM