STEPHEN SONDHEIM: THE STORY SO FAR 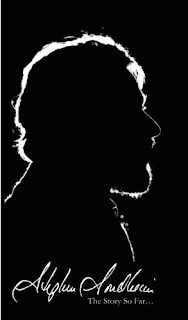 Now available from Sony BMG Masterworks is Stephen Sondheim: The Story So Far, a four CD box set of recordings of Stephen Sondheim's music, including rare and previously unreleased tracks. The 81 tracks cover selections from Sondheim’s fifteen Broadway shows, film scores, TV specials and incidental music. Also included are some demo recordings from his private collection of songs cut from his shows or written for cancelled staged and film projects.

To celebrate the release, Sony BMG is hosting a podcast series with Stephen Sondheim, stars of his shows and other collaborators

Tuesday, October 7 The Story So Far: Saturday Night/West Side Story

Tuesday, October 21 The Story So Far: A Funny Thing Happened on the Way to the Forum

Tuesday, October 28 The Story So Far: Anyone Can Whistle

Friday, November 7 Commentary: Elaine Stritch on “The Ladies Who Lunch”

Tuesday, November 18 The Story So Far: A Little Night Music

Tuesday, December 9 Commentary: Len Cariou on “The Barber and His Wife”

Tuesday, December 16 The Story So Far: Merrily We Roll Along

Tuesday, December 23 The Story So Far: Sunday in the Park with George

Tuesday, January 13 The Story So Far: Into the Woods

Tuesday, January 27 Away from the Stage: Writing for Different Mediums

Tuesday, February 3 The Story So Far

TRACK LIST FOR STEPHEN SONDHEIM: THE STORY SO FAR

A Funny Thing Happened on the Way to the Forum
"Comedy Tonight" (Zero Mostel, Company)
"Everybody Ought to Have a Maid" (Stephen Collins, Christopher Durang, Michael Rupert)
"There's Something About a War"* (Stephen Sondheim)

The Mad Show
"The Boy From…" (Linda Lavin)

Sunday in the Park with George
"Finishing the Hat" (Mandy Patinkin)

"I Must Be Dreaming"*
Piano Playhouse (1948)
Cy Walter, Stan Freeman

"Kukla, Fran and Ollie": "The Two of You"* (Stephen Sondheim)

Invitation to a March
"Incidental Music"

The Thing of It Is
Screenplay: William Goldman
Unproduced film musical

The Seven-Per-Cent Solution
Screenplay: Nicholas Meyer
"I Never Do Anything Twice (The Madam's Song)" (Régine)

Thanks for leading me to the podcast! These are great!

Wow, thanks. I'll definitely be downloading those podcasts.

Esther, I hope you download the music first - the podcasts are merely to learn and further enhance appreciation for this one and only true Musical Theatre God.

WOW! That sounds absolutely fabulous! You have know all the cool stuff! But what exactly is a podcast? I could never figure that out.

Well, Hula Hank, a podcast is usually an interview, discussion or some sort of news item that is made available via iTunes so you can download it to your iPod for (usually) free - hence the word PODcast. In most cases though, if its news or some other site like Sony BMG, you don't have to go to iTunes to listen - just go to the site and enjoy the experience through streaming audio to your computer speakers.

Excellent! I have never been up on the iPod, iTunes, iMac, iPhone thing so now it definitely makes a ton of sense!