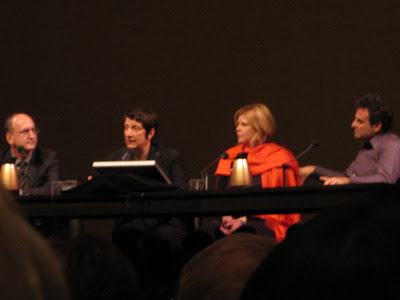 Tonight, we attended the Met Opera Guild's lecture
Projections of Hellfire and Damnation: Berlioz's Masterwork Re-imagined . Peter Gelb, General Manager of the Metropolitan Opera, moderated a discussion about the new production of Berlioz's La Damnation de Faust with director Robert LePage, mezzo soprano Susan Graham( Marguerite) and Italian tenor Marcello Giordani (Faust). The production premiers on November 7th. The opera, rarely staged, was last at the Met in 1907. LePage imagined this production in the 1990s and Susan debuted in it in Japan in 1999. Since that production, technology has evolved. LePage, playwright, actor and film director, was first approached by Gelb to take on the production. LePage, who had been warned that opera singers were difficult, took on the project. Although he felt terrorized, he has made friends with the singers, which was definitely clear by the talk this evening. Of course, who couldn't make friends with Susan Graham?

This production will be revolutionary, as it employs technology never before used in a live opera production. Film projections on the set are are an interaction of imagery that are "organically born of what the singers are singing about". The imagery is programmed through sensory cameras to react to the presence of the singers, both audibly though sonic sensors and physically from their body heat. LePage designed the direction from his inspiration by references to the period of the composer Berlioz. Some of the projections are interactive, i.e. what appears to be birds or leaves on trees on film, is intelligent pixels that react to the voices and instruments in the pit. A candle flame projected over the singer's face will seem as though she is becoming the flame, and is based on the volume of her voice and the heat of her body, of which Gelb said, "[which] gives new meaning to a truly hot performance." Susan reacted by making a cougar growl. LePage said, "[T]he voice is the starting point for the designer and invites in new technology. It exists and evolves on that evening's live performance. It is a metaphysical and poetic rendering, not canned but a reaction to her voice and body at that moment." He went on to say, "Theatre directors always try to add things that aren't there but with Berlioz, the music tells you what to do. You hear it in the music which is full of indication and stage direction in the score...if the director comes in with his concept but is closed to the music and the singers' experience, you're not getting anywhere. Theatre and opera is a meeting place for artists and you have to welcome the experience." Susan added, "Berlioz's orchestrations express the emotions. It's Berliozian magic and skewed reality in the text." She recently stumbled across a videotape of the '99 production and popped it in her vcr (yes, she still has a vcr). She said it was amazing to relive it and was inspired to new storytelling. Marcello said, "He's happy to be a virgin in this kind of production because it makes him a better artist." He emphasized that since there is less actual movement on the stage in this production, he is able to concentrate on his singing. The singers will be wearing microphones, but it is only for the technology, not for amplification.

LePage said he's not afraid of the acting and gesturing cliches in opera, although he doesn't necessarily allow them. He said, "It's larger than life voices, characters, situations in controlled elegant screaming but you still need to move in a tactful and tasteful manner...so that the voice can explode vocally but not the body physically." On combining acting and singing, Susan said, "I was a piano player, but it was a production of The Sound of Music at Midland Lee High School when I was 17. I played Maria. The music and acting were the cake. The singing was the icing on the cake...There were not a lot of operatic opportunities in West Texas so I tell the story with honesty and integrity so my family can understand. The dramatic element is what sets me on fire. Singing is such a natural extension that it feels like talking."

LePage finished by saying, "Opera has a very thick 4th Wall so it's important to get the audience involved emotionally." Susan added, "You don't cry on stage, you make the audience cry about what you're doing on stage."

The evening ended after a short sneak preview from LePage about the Met's new production of the Ring Cycle which will premier in 2010. He said he's going to the source that inspired Wagner. He went to Iceland and deep into Viking and Celtic themes. He is connecting primal symbols and themes in a modern interactive way, not unlike the technology that is being used in this production.

We are seeing this production on November 18th. The French composer Berlioz is one of my favorites plus it's Susan Graham. Also, it's a story about the Devil - it will be hard to go wrong with that. I can hardly wait!

Note: quotes are somewhat loose as I was speed writing as fast as possible and I can't read my own writing
at 7:59 PM

I'm interested to see how this will translate to the HD cinicast. I can't wait to hear how you guys enjoy it in house.

It is my first time here. I just wanted to say hi!