Chita Rivera: "The Secret of Life"

In a short and sassy, sexy, bright red dress layered with ruffles and sparkles, Chita Rivera wowed us. She announced that she wouldn't dance - clarifying, "I didn't say I can't dance, I WON'T dance." Yet, in red satin heels, trimmed with sparkles, she couldn't keep still. She was all over that tiny stage at Feinstein's at the Regency. It was an abbreviated and even better version of Chita Rivera: The Dancer's Life. She included numbers from all of her years on Broadway, including bits from Bye Bye Birdie, Seventh Heaven, West Side Story, The Rink, Kiss of the Spider Woman and Chicago, plus a gorgeous rendition of Carousel from Jacques Brell is Alive and Well and Living in Paris, another show she did. She did Love and Love Alone from The Visit and said again that they are still trying - and praying - to bring it to Broadway next year. Other songs included I Don't Remember You from Kander & Ebb's The Happy Time, Richard Rodney Bennett's Not Exactly Paris, and James Taylor's The Secret of Life, which is also the title of her show. There's no doubt that Chita knows the secret of her own life and she's willing to share it with you. I know I feel nothing but joy when I'm watching her perform and it carries me and reminds me to step it up. She also lives her life like she's still 35, even at age 73. As she said, "Can you believe that West Side Story is fifty years old? I don't believe it. Honestly, nobody told me. I still think I'm 35." 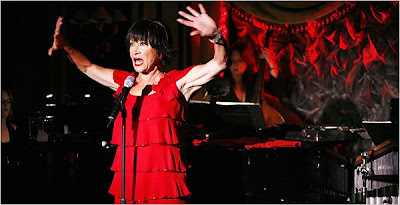 Photo by Rachel Papo for The New York Times
at 8:14 AM