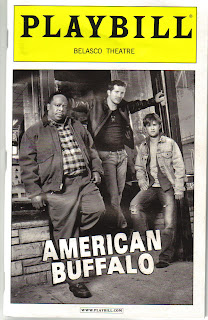 Noah took me to see American Buffalo at the Belasco on Broadway last night. I [insert swear word] loved it! It's about three petty con men who spend most of their time in a junk shop hoping for a job. Cedric The Entertainer (Broadway debut) and John Leguizamo were [insert swear word] terrific - so natural and hysterical comic timing. The set as a very organized junk shop, owned by Cedric's character and the most ligitimate of the three, was terrific. Haley Joel Osmet (Broadway debut) was appropriately awkward and slow as the wanna-be con man in a lesser role. Cedric's character had a touching soft spot for him. It all made for great comedy with just the right about of surprise. The house was packed with Cedric fans who were loud with their enthusiasm at seeing him and hearing him deliver his lines. It was also press night so the house was packed with critics. Mamet really swears it up but the content is really interesting. I really had fun...although I think I lost my [insert swear word] camera in the [insert swear word] Belasco.
at 11:58 AM

I like that we get to insert our swear word of choice. It's a little like choose your own adventure...

I'm glad the show suited you to a "T," because the only thing that separates Mame from Mamet is that f***in' letter.