Start spreadin' the news: LIZA AT THE PALACE 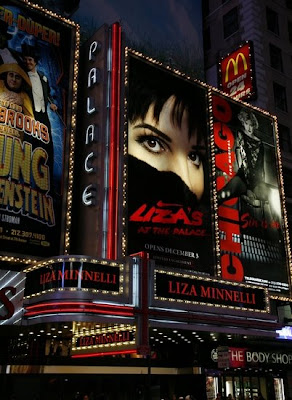 I respectfully recant the comments I made to certain people that I'd be surprised that Liza could sing anything much less an entire 2 1/2 hour show. You know I love being entertained and boy, oh boy, does Liza entertain. I don't know how she summons it after all that she's been through. As my friend Joey said, "Liza's played the Palace before, but this time she's got two new hips." She's certainly resilient. But that's not all she is. I was expecting a cartoonish version of the brilliance that was, but she's nothing short of fabulous. Damn, she's good and so funny! Through four costume changes, Liza thrilled us with standards and a few of her hits, including Maybe This Time, Mammy and Cabaret. The second act was dedicated to and somewhat a recreation of her Godmother Kay Thompson's nightclub act. She encored with New York, New York and Have Yourself a Merry Little Christmas and went right into I'll be Seeing You. It was a dress rehearsal so just a couple of times they stopped to adjust the microphones. The best moment was off the cuff from Liza, when she said, "There's something wrong with my box," as she was pulled aside so that her wireless could be fixed. It was just all too beyond thrilling. I have to admit that I thought I would die when she started with New York, New York - I think everybody else in the audience felt the same way as we all jumped to our feet mid-song.
at 11:12 AM

OH I really should get there to see her, I have already seen the show in AC, but maybe I have to see it at the Palace too.