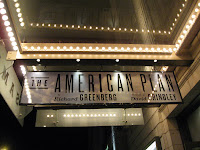 I've seen three plays and a musical at Manhattan Theatre Club so far. All four have been duds for me. First was Reckless. It made me want to run away fast. The second was LoveMusik. I'm still waiting to get my money back on that one. The third was To Be or Not To Be. It just made me sad. I was with my dear SOB which was the only bright thing of the day. The fourth was last night with The American Plan. It actually teetered on the brink of not being a dud, but then crashed and burned in the last two scenes.

The orchestra level of the house was only about 80% full on the last press night before opening. Watching the press come in was almost more interesting than the play itself. I spotted Charles Isherwood and Rex Reed, among others. David Stone and Mary Stuart Masterson were there too. The Fur Ball Hat Lady was there too. If you've seen her, you know who I'm talking about. This time she was all in red, instead of white. Can blue be far behind? Wow.

On the uptown bus, I overheard a woman ask her husband, "What do you think Mercedes Ruehl thinks of being in such a bad show?" I thought Mercedes was good - she always entertains and fascinates. So was Lily Rabe. I liked their part and found their characters as mother Eva and daughter Lili interesting. The mother seems eccentric and a bit controlling. There might be something wrong with the daughter but we only have the mother's word on that really. It felt old fashioned and was awkward at times.

It was clunkily acted at times, especially by the two male cast members, Kieran Campion, as Lili's fiance, and Austin Lysy, as his secret lover. The mother manages to find out the truth about the gay lover and then it's just down hill after that. It's a felt bit like Light in the Piazza meets Brokeback Mountain. I'm still not quite sure what the American plan is. Does Manhattan Theatre Club produce bad plays or is it just the luck of the draw for me? Sigh. Next up after The American Plan for this company is David Hyde Pierce in Accent on Youth. Maybe I'll see it.
at 9:41 AM