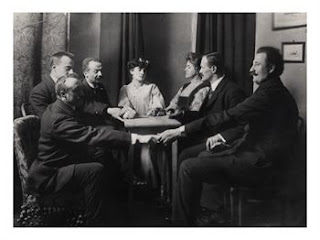 Via Craigslist: Blithe Spirit seeking Medium to conjure up the spirit of Noel Coward; Auditions are being held on January 21, 2009

The producers of BLITHE SPIRIT are looking for a real-life psychic or medium to work closely with the cast of the show to guarantee that each performance is every bit as genuine as possible. The producers are seeking real-life mediums or actors who are also mediums to prepare a two-minute audition to conjure the spirit of Noel Coward or to display any psychic abilities. This psychic or medium chosen will receive full credit as the show’s official consultant in the show’s Playbill for their work.

Auditions are being held on Wednesday, January 21, 2009. To audition, please email your name with an attached resume to blithespiritcasting@gmail.com. You will receive a confirmation with exact details of time and place. If you have any questions, feel free to send an e-mail to this address as well.

Blithe Spirit, one of Noel Coward’s most popular comedies, was first seen on Broadway, in 1941, the same year it was produced in London where it set British box office records and was the longest running comedy (1997 performances) until it was eventually surpassed by Boeing-Boeing in the 1970’s. The original Broadway production played nearly two years and co-starred Leonora Corbett, Mildred Natwick, Clifton Webb and Peggy Wood. It was last seen on Broadway in an all-star production in 1987 with Richard Chamberlain, Blythe Danner, Judith Ivey, and Geraldine Page, in her final Broadway appearance. Coward, in his autobiography, claimed he wrote the play in five days during a holiday. Only two lines of dialogue were removed before its first production in London.

Compensation: None.
This is a part-time job.
Principals only. Recruiters, please don't contact this job poster.
Please, no phone calls about this job!
Please do not contact job poster about other services, products or commercial interests.
PostingID: 981394316
at 3:03 PM

i want to be surprised by this, but i'm not.

Cute idea! But to offer no compensation? Lame.