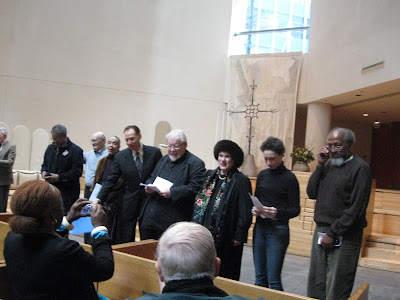 I spent my lunch hour celebrating the election of President Obama with The TIPA Project. TIPA, short for Toward International Peace through the Arts, presented Poetry and Prose for Our New President at St. Peter's Church. The program included:

Tammy Grimes read from W.B. Yeats "Sailing to Byzantium" and recited "The Song of Wandering Aengus"

Eli Wallach and Anne Jackson told stories and read from a program they performed when their daughters were still teenagers. The reading included Emily Dickinson's Hope, Edna St. Vincent Millay's "Recuerdo", John Updike's "Thoughts While Driving Home", Phyllis McGinley's "Refelctions at Dawn", and a letter from Benjamin Franklin giving advice to not only marry, but marry an older woman written June 25, 1745.

Marian Seldes read Walt Whitman's "Manahatta", "When I Heard the Learned Astronomer", "A Noiseless Patient Spider" and "The Last Invocation"
at 8:46 PM

Email ThisBlogThis!Share to TwitterShare to FacebookShare to Pinterest
Labels: Marian Seldes, Toward International Peace Through the Arts

Wow, it's like my junior year of college! "Something there is that doesn't love a wall..." I'll be able to recite that on my death bed.