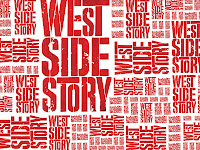 As I write this, I realize that it's been almost 24 hours since I heard the first notes of the West Side Story overture that pierced me and sent me over the edge. The chills I felt last night still linger. I am still reeling. I can't stop thinking about that brilliant, soaring score played by the glorious and lush thirty one piece orchestra, which includes a huge percussion section visible in two boxes on either side of the mezzanine. If there had only been the music, that would have been enough.

But, then the dancing began. It's in the movie, but seeing it live is thrilling and overwhelming. This cast, particularly the men, convey the emotion of the score with brilliant precision in their dance. From the very first scene of the Jets and Sharks, to the dance in the gym (the famous mambo in gorgeous color and light), to the second act ballet as Maria and Tony make love, every moment is a dream come true.

It's hard to keep your eyes off the men, but the women demand attention in their gorgeous costumes - short and tight for the Americans, bright, frilly and festive for the Puerto Ricans. All are sexy. And all are fierce dancers.

Karen Olivo as Anita is a star in the making. She is sex on legs. I don't think she's quite there, but the transformation is happening. As Chita Rivera, the original Anita said, she was no better in other shows, but the material is better. You see Anita as a practically frumpy seamstress and then she literally lets her long hair down and sheds her work coat to become bright and regal. Her frightened and panic-stricken portrayal in the rape scene is probably enough already to not only get her a Tony nomination but to take it home as well.

And, then the singing began. The cast in its entirety is strong enough, but Matt Cavenaugh's beautiful high tenor is a revelation for Tony. He is the stuff that is Leading Man. You would never know that young Josefina Scaglione as Maria is making her New York stage debut. She is confident in every aspect. Her voice is pure crystal and she is absolutely angelic-looking. Your heart breaks for her as she falls in love so blindly.

Some of the book and some lyrics have been translated to Spanish. There are no super titles. This did not detract for me at all. I know enough Spanish to get by, besides the acting is very, very good and well, I've seen the movie. I know what's happening. If anything, it added to the story for me. It's more realistic, that's for sure.

Even though the set is minimalistic, it's incredible. The buildings and the bridges really seem like the West Side of New York. After the the set transformed into the scene below the bridge before the rumble, the audience applauded.

The only slow moments for me were the Officer Krupke scene. The lyrics are standard Sondheim funny and smart, but it felt too long. It almost took too much time away from the drama and heartbreak of the second act. I knew what was coming and although I didn't want to rush to it, Officer Krupke just distracted me.

I was carried away in this completely packed house. The audience cheered wildly every chance it was given, rightly so. It was an emotional roller coaster and I couldn't help but shed tears for the characters and for the sheer joy of the work. The Maria theme has been with me all day and I know that I must experience it live again, probably over and over.

I hear that there's a huge advance and only single seats are available through May. That's good news for this worthy classic. There are no discounts, but there's a lottery that takes place two hours before curtain. If you win, there are 18 front row seats at $26.50 each, cash only. Be warned, the stage is very high and if you sit there, you will not see the actors' feet.
at 6:42 PM

Email ThisBlogThis!Share to TwitterShare to FacebookShare to Pinterest
Labels: Seat 13, West Side Story

Wonderful review! I'm so glad you enjoyed it.