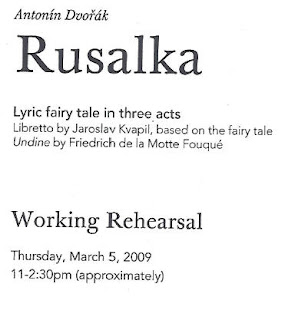 Yesterday, we attended a working rehearsal of Rusalka. It was a rehearsal of Act II only. It was fun to see the set in progress. Maestro Jirí Belohlávek stopped and re-started as needed. The Met Chorus rehearsed briefly, off stage. Chorus Master Palumbo seemed to be testing their volume and giving direction from various points in the house. The first part of the principals' rehearsal was only Kate Lindsey as "Kitchen Boy" and James Courtney as "Gamekeeper". Kristinn Sigmundsson as the "Water Gnome" then joined. Finally Renée Fleming as "Rusalka", Aleksandrs Antonenko as the "Prince" and Christine Georke as the "Foreign Princess" joined the rehearsal. While, the orchestra was in casual clothes, the singers were in costume, but not wigs or makeup. Since it was Act II, we didn't hear Renée sing until near the end of the scene. All sounded great, although I don't think they were singing in full voice. In between starts and stops by the Maestro, the singers appeared to be chatting it up and having a good time. All during the process, stagehands continued to tinker with the set, which I found amusing since the singers were in costume and just ignored them. We also saw Lauren Flannigan taking notes in the orchestra section. We were seated in the front row of the Dress Circle. The Dress Circle seamed to be about 1/2 full, while the Parterre level, where Encore Society members were seated, was mostly full. It was a fun and interesting experience to witness the process. 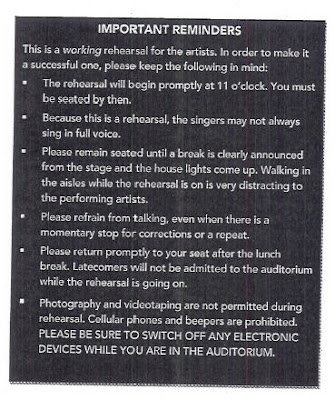 How does one become one of the lucky to attend a working rehearsal at the Met? Does it cost anything? Is the environment very different from a performance? And finally, how do employees explain to their superiors that they will need to leave work for three hours? I would really like the answer to that last one, especially if it turns out that I should be rquired to work on Saturday afternoons!

Hmmm, I don't know Tyler - must be my clean living and bright outlook. wink wink.

Why was Lauren Flannigan taking notes?

What was she doing there?