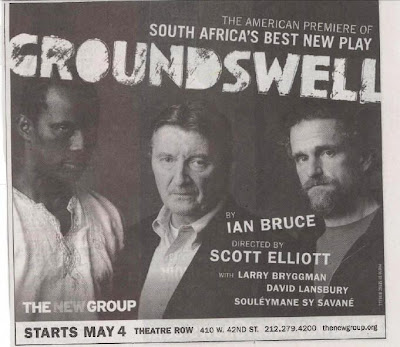 A few weeks ago, I clipped this ad for Groundswell because Larry Bryggman was in the picture. I taped him up to the side of my computer monitor so I would remember to go see him in this play.

I adore Larry - I have for years and years since I was old enough to watch As the World Turns on tv. He played bad guy Dr. John Dixon and I just thought he was wonderful. I finally saw him on stage here in New York in Twelve Angry Men and then last year off-Broadway in Edward Albee's Occupant. I almost don't care what I see him in just as long as I see him on stage.

Even better, Groundswell, a new play being staged by The New Group at the Acorn Theatre in Theatre Row, sounded interesting enough for me to venture off-Broadway. I even broke my matinee rule (matinees are the worst, unless it's a Sunday and now I know, unless off-Broadway).

This story is of three very different men on one day in a very isolated sea-side shack in South Africa. It takes place post-apartheid and examines the differences between retribution, charity and expectations. I found it riviting and thought provoking. It opened with the black African Thami, played beautifully by Souléymane Sy Savané, reading out loud as he writes a letter to his wife. He speaks in a native African language. I could not understand a word, but there was love in his voice. He carefully put the letter away and begins quietly and methodically cleaning the shack. His white friend Johan, played by David Lansbury, bursts in the door, obviously from blustery weather. His presence is at once upsetting and welcomed.

Thami and Johan couldn't be more different, but it becomes clear that there is kinship and Johan depends more on Thami than vice versa. Johan needs his friendship and therefore wants to help him. Thami needs help but in the end he intends to be more loyal to his family than his friend. They are scheming to purchase rights to a diamond mine from the South African government.

In comes Larry Bryggman who plays Smith, a traveler and guest at the shack. He appears to have had a successful life. Johan and Thami ask him to invest in their scheme. When Smith politely refuses, things go wrong.

The play takes a frightening and fairly violent turn as it brings light to a struggle between right and wrong, and what is really owed to somebody you didn't actually do wrong toward just because of the color of your skin. Smith argues that he doesn't owe anything to anybody because he was never for apartheid to begin with and has also been a victim. There is no solution in the end and the questions are left open, almost uncomfortably.

The players are brilliant in this very intense drama that is almost 2 hours with no intermission. Despite the length, there is almost no time to even breathe. Savané is beautiful on stage and play Thami as a man who just wants for his family to move out of poverty. Bryggman was wonderful and elegant as always. His pleading was very real as was his refusal to admit guilt in apartheid. I was amazed by Lansbury. He was crass, interesting and held a very strong South African accent throughout the play. He was the most believable of the three (he must have inherited a skill or two from this aunt, especially in the accent department).

Groundswell runs through June 27th at the Acorn in Theatre Row on 42nd Street.
at 2:40 PM