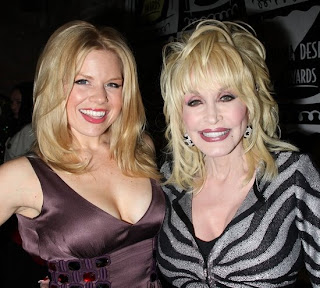 After Blithe Spirit last night, Kevin, Roxie and I were just basking in the glow of seeing 5 Time Tony Winner Angela Lansbury (and loitering in) in Shubert Alley, when I noticed Megan Hilty strolling by. Megan is currently starring as Doralee Rhodes in 9 to 5 the Musical. Doralee is the character Dolly Parton played in the 1980 movie Nine to Five.

I called out to her and she stopped to chat with us. She is absolutely one of the nicest young stars on Broadway. I had such fun at 9 to 5 and I loved that Megan's sort of playing Dolly playing Doralee. You see, Dolly was my first Diva. Megan captures her exuberance perfectly and has a sweet voice, joyful smile and looks to match.

Awww, that is so sweet. I've had some wonderful chances to chat with actors at the stage door as I get my Playbill signed. The overwhelming majority are incredibly gracious.