Christine Ebersole is back in the Hamptons 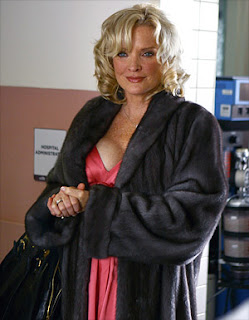 Christine Ebersole is back in the Hamptons! She's still playing an eccentrically outrageous character, but this time is the opposite of the shabby Little Edie Beale. She's playing reoccurring character, Ms. Newberg, on the new dramedy Royal Pains .

Royal Pains is about a young doctor named Hank, played handsomely and heroically by Mark Feuerstein, who has been fired from a Manhattan hospital. His brother Evan, played adorably by Paulo Costanzo, drags him out to the Hamptons to forget his woes. After one thing leads to another and Hank saves the life of a young woman at an exclusive private party, Hank is invited to become a concierge doctor to the rich (and sometimes not so rich) of the Hamptons. Hank is a little bit too much of a "MacGyver" when it comes to saving his patients, but the stories are a series of compelling and sometimes quirky tales. It doesn't hurt that the location is set in the beautiful summer scenery of the north shore of Long Island.

In a recent media Q&A, Christine said about the role, "Well, I was offered the role. I didn’t have to audition, which is always nice. And what drew me to the role is, I think she’s a very outspoken and kind of larger than life character, and gets to play somebody rich. That’s always fun, and the great thing about doing the show is the locations that we get to visit are really just extraordinary. I get to see all these beautiful things, and to be a part of a comedy and to be working with the people that I’m working with is just a really rarified air, so it didn’t take much convincing. When I read the script, I saw that it was such an intelligent, funny script, and with really well developed characters, and so it was kind of an easy decision."

Other Broadway babies making appearances on the series have been Tony nominees Michael Mulheren in Episode 2: There Will Be Food, Veanne Cox in Episode 5: No Man Is an Island, and Olga Merediz, who played Ms. Newberg's maid in Episode 6: If I Were a Sick Man. In the pilot episode, Tony Winner Adriane Lenox was a hospital administrator and Tony nominee Robert LuPone was the outgoing concierge doctor.

Royal Pains airs on Thursdays on the USA Network.

Hooray! I love that show!

there are regular shows on USA Network? huh