How Now, Dow Jones at FringeNYC 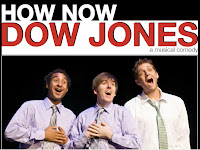 One of the FringeNYC shows enjoyed the most was How Now, Dow Jones, produced by UNSUNGMUSICALSCO.INC. There was nothing about it that put in on the "fringe" of theatre, except for maybe the fact that it was a revival of a Broadway show that didn't do very well in 1967.

I can imagine why it didn't do very well - it has a corny plot and jaunty music, in a time when musical theatre of the late 60s was beginning to change to be less big Broadway show and more theatrical and serious.

It's about an engaged couple who both work in the financial district. He's stalling until the Dow Jones average hits 1,000. She happens to be the "voice" of the Dow Jones. Frustrated and depressed, she meets a charming young man who's equally frustrated and depressed. They hook up - whoops, she becomes pregnant. In order to force her fiance into expediting their marriage, she falsely announces that the Dow Jones has hit 1,000. Alas, chaos. But the real father saves the day leads the way - thank goodness because the finale was so fun that the audience couldn't help but clap along!

It wasn't hard to have fun - the show was terrifically revised and directed by Ben West. Ben has rightfully been honored with an Overall Excellence Award for Direction by this year's FringeNYC. Rommy Sandhu provided the classic choreography, including a very well excuted dance break by "Dow" (Shane Bland) and "Jones" (Dennis O'Bannion), and complete with the original choreography employed in Step to the Rear.

I loved the leads. As the hero, "Charley", Conlin Hanlon was just dishy with All-American charm and he sang just fine too. The leading lady, "Kate" was played by Cristen Paige. She was just perfect as the earnest young woman. She has a lovely soprano voice. (I knew I saw her somewhere before but couldn't place her - guess what? She played George Hearn's daughter in the Signature's The Visit! Yes!)

Even as a revival, some songs cut from the original were restored, the story updated a bit (an hilarious joke about Lehman Brothers wasn't lost on me) and it was cut down from the original running time. Although I'm not sure it belongs in Fringe, it was still better than some shows I've seen at Musicals Tonight, Musicals in Mufti and even a few at Encores!, especially since they were completely off-book.

Ben West is also the Artistic Director of UNSUNGMUSICALSCO.INC, a "production company dedicated to the preservation of musical theatre through the presentation of infrequently performed works." Current projects in development include new versions of Platinum, Lend an Ear and Rock 'N' Roll! The First 5,000 Years.

Perhaps there should be a festival of musical revivals. I know my pal Kevin is with me on this. There are just countless musicals from the 1940s through the 1970s that I'd just love to see, particularly Prettybelle, Henry, Sweet, Henry, I Had a Ball, No Strings, House of Flowers, The Grass Harp, Allegro etc....