Kate Baldwin, how are things on the World Wide Web? 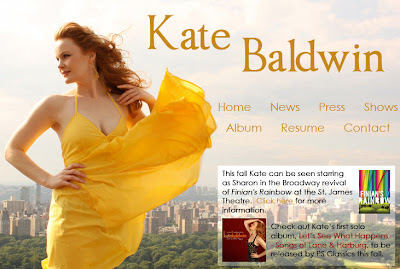 Kate Baldwin has an official website now! Check out www.kate-baldwin.com to see gorgeous new pictures of Kate (Guess what? She's just as beautiful on the inside as she is on the outside!), get news of her upcoming Broadway show Finian's Rainbow, and information and photos from her previous performances.

Also, here's the best news - Kate's first solo album, Songs of Lane & Harburg - Let's See What Happens on the PS Classics label will be released on October 20th, around which time Kate tells she'll be doing an appearance and signing. She also says she has a really exciting gig coming in December. The music direction is by Rob Berman and Tommy Krasker is the Executive Producer. Jonathan Tunick and the Broadway Moonlighters also make an appearance! The song list, provided exclusively to yours truly from Miss B. herself, is quite thrilling (and I know my friend Kevin will love the first track):

1. That Something Extra Special
Jule Styne & E.Y. Harburg
(From Darling Of The Day, 1968)
Orch. Sam Davis

4. Come Back to Me
Burton Lane & Alan Jay Lerner
(from On a Clear Day
You Can See Forever, 1965)
orch. Jonathan Tunick

12. Where Have I
Seen Your Face Before?
Burton Lane & E.Y. Harburg
orch. Joel Fram