On the Way Down, by Ashberry Procuctions, at Access Theatre

On Thursday night, I saw the new play On the Way Down by Michael Rudez, produced by Ashberry Productions. It's the story of three buddies in their late twenties - one married woman, two single guys - on their annual holiday in the Hamptons.

The premise interesting - it's their annual trip for fun and relaxing in the quiet Hamptons. For some unknown reason, this time all 8 million New Yorkers are in the Hamptons as well - it's hot, overcrowded, and there's no food left. However, Rudez more or less abandons this premise for a different, more sinister, yet somewhat confusing plot that seems to suddenly appear out of nowhere. A tragedy has occurred although it's only presented through confrontations between the two guys.

The three buddies have a little alone time before the woman's husband arrives. At first, the mood is fun and teasing, recalling old times in college and of previous trips. It's clear that these three have a history of more than just friends, although it's unclear how deep it is.

The actors, Lindsay Wolf, Steven Todd Smith and Rocco Chierichella, execute this story nicely. In particular, Smith handles his role with finesse and a calm maturity. Wolf is lovely and she seems to the easy going one of group as well as the glue that holds them together. As the story unfolds, it's clear that she is also the one who is the driving force of the conflict between them all, although the reason itself isn't always clear. She executes a bit of mad scene well, conveying sort of a confused mid-life crisis although her character is a little to seemingly young. Chierichella, the aloof playboy of the group, plays it rather stereotypically, although he's good at confrontational scenes if maybe too methodically.

It's easy to relate to these characters, who are all dealing with change in relationships, career and burdens of expectations and growing older. The storyline itself is choppy, but compelling and, overall, even though the story itself could use some streamlining, it's a good time in this great little blackbox at the Access Theatre. There are three more chances to catch the production - today at 2 pm, tonight at 8 pm and tomorrow night at 8 pm. Access Theatre is at 380 Broadway, just above Canal. 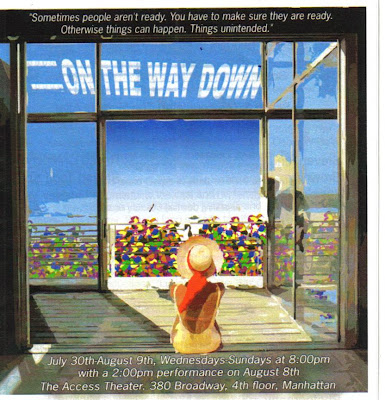