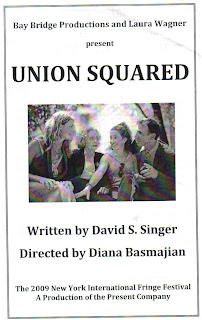 One of the FringeNYC plays I saw was Union Squared at The Players Theatre on MacDougal.

By David S. Singer, Union Squared is the story of a Wall Street broker whose mother reveals that he will inherit millions of dollars that were illegally deposited in a Swiss account by his late father. Complicating matters, and what becomes the main issue, is that he accidentally texts plans for a tryst with his mistress to his wife. The wife not only befriends the mistress but falls in love with her. The play itself is interesting and timely. In fact, The New York Times profiled Mr. Singer earlier this month.

Unfortuately, the cast - Levi Sochet as the stockbroker, Carlina Ferrari as the wife and Annie Meisels as the mistress - failed to execute. Chalk the failure up to poor acting and some plain and awkward and irritating miscasting. Adding to the failure were the excruciatingly long scene changes and the clipped directing by Diana Basmajian. The only bright point was veteran actress Anita Keal, who effectively plays not only the mother, but also a wise bag lady and a funny couples counselor. Unfortunately her talent and experience stand out like a sore thumb compared to the miscasting of the rest of the actors.

Move the love triangle to the background and bring forward the consequences of the inheritance, and with a different cast and director, this could be a really great, interesting story.
at 10:54 AM