Emily, an Amethyst Remembrance by the Firebone Theatre Company 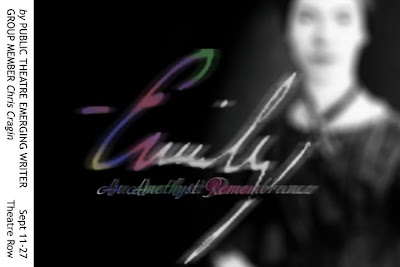 I held a jewel...I held a jewel in my fingers
And went to sleep
The day was warm, and winds were prosy;
I said: " 'T will keep."
I woke and chid my honest fingers, --
The gem was gone;
And now an amethyst remembrance
Is all I own.
~Emily Dickinson

Recently, I saw Emily, An Amethyst Remembrance presented by the Firebone Theatre Company at the Kirk in Theatre Row. Chris Cragin's play about the reclusive 19th century American poet is interesting, loving and thoughtful, mixing drama with words from Emily's own poems, sometimes recited as dialogue. The play also moves backwards in time. Elizabeth A. Davis portrayed Emily with simple beauty. Elizabeth's ethereal and quiet presence captured my attention and transported me as she lived that poetry. Christopher Bonewitz also gave a noteable performance as Elizabeth's teacher.