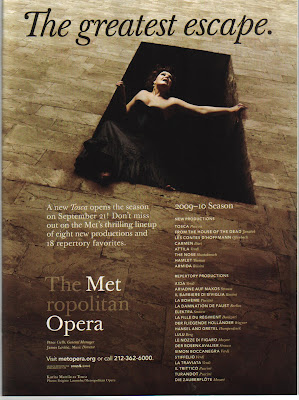 Yo, I'm playing hooky from my day job today to be back in the da house - the Metropolitan Opera House! Today, the Met is hosting an open house for the final dress rehearsal of the new production of Tosca, starring Karita Mattila.

Update: Karita was fabulous as Tosca. She looks gorgeous and glamourous as a brunette and especially in Milena Canonero's luscious costumes. It doesn't hurt that she acts with ease and grace, inhabiting the character thoroughly. Her mere presence is dramatic. Marcelo Alvarez was an easy match as her lover. His tenor voice is so beautiful - no high cry here. I don't love the tenor voice in general, but I'd listen to Marcello any time. George Gagnidze was terrific as the menacing Scarpia - he looks the part, a sleazy crime boss ala Tony Soprano in period costume.

This is a new production by Luc Bondy. Act I is fine, even though there is no similarity to Zeffirelli's opulant set, it was fine as my eyes rarely left Karita. The luscious costumes distracted from the lack of set.

Fortunately, there is some recovery with Act III, especially with Marcello's gorgeous "E lucevan le stelle" which deservedly earned loud praise from the audience. The final moment of the drama is a head scratcher but I won't spoil it for you - hopefully they'll fix it by Opening Night.

This year's Open House didn't feature the usual Met department demonstrations, free lunch or a talkback with the cast, nevertheless it was a great escape. 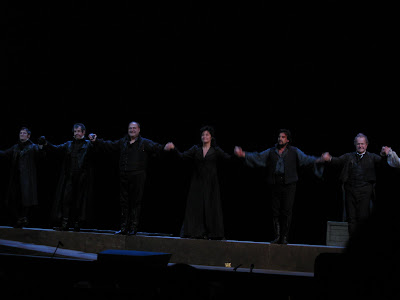 Yes, Sally told me they used to give out free sandwiches. Thank god for hot dogs!

And Marcelo Alvarez is now one of my favorites. I've loved him in everything.