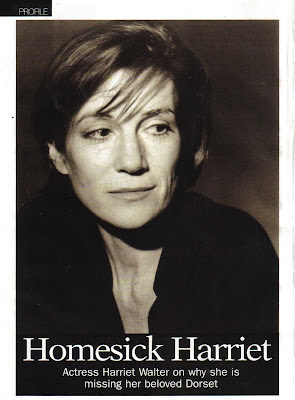 But, he learned his lesson quite quickly when Dorset Society magazine arrived in his mailbox and he turned the page to find Harriet Walter staring at him. Serves him right. But he did redeem himself when he posted the magazine to me.

Ah, it's lovely. Sadly, Harriet was homesick for her home in Dorset. I can't blame her - Dorset looks splendid. However, I'm in favor of making her homesick again. Harriet, please come back to Broadway very soon. 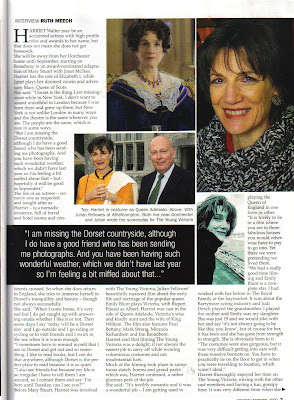 Thank you for posting the article. I saw "Mary Stuart" on Broadway in July, and was mesmerized by Harriet Walter's and Janet McTeer's performance. One thing strange about the article -- Harriet Walter is quoted as saying she hadn't worked with Janet McTeer before. They played together in "Mary Stuart" on the West End in 2005. They were also in "Five Days" for the BBC awhile back, perhaps in only or two scenes together...

Come back Harriet Walter, come back!!
Janet McTeer is terrorizing 85th Street with a lead pipe and only you can stop her!