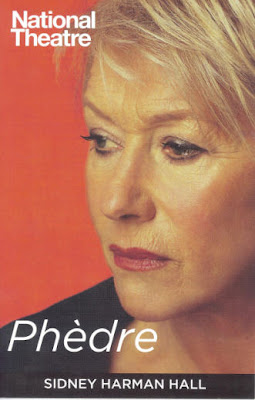 Have you ever known that you're seeing somebody and hearing somebody but can't quite connect that it's really true that they are there in front of you? It was like that the first time I saw Renée Fleming at Carnegie, Angela Lansbury at Wall to Wall Sondheim, Meryl Streep at the Public...and now Dame Helen Mirren.

She played Phedre at the Shakespeare Theatre Company in DC for a 2 week stint - a transfer from London's National Theatre, and the first leg of an international tour. We were there for the final performance at the gorgeous Sidney Harman Hall. Helen executed the role with such ease and humor that it almost seemed as though it wasn't even a "Greek" tragedy. It was so enjoyable! There was no intermission but the 1 hour 55 minutes flew by. Costumes and lighting enhanced the scene oh so lightly and beautifully. The British cast use no artificial amplification (except for briefly when there were not center stage) and I could hear them clearly and succinctly from our rear mezzanine seats. 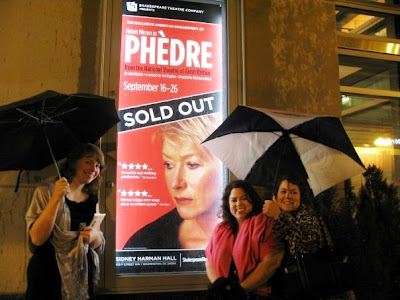 We had the best time, thank you Helen Mirren (all friends who met because of La Diva + 1, so thank you also Renée Fleming ) - we drove down to DC in style in a big black caddy, had dinners, drank wines and cocktails, looked at monuments, went to Mount Vernon!, saw Dame Helen and drank more cocktails. We could see the show without all of the condiments, but it completed the recipe for the perfect weekend.