Either way you look at it, Oleanna gives you something to talk about 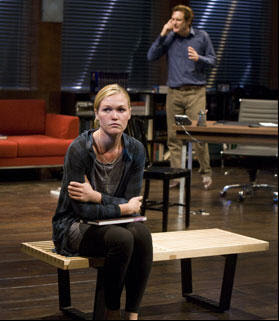 Kevin and I attended the Broadway run of Oleanna at the invitation of the producers. Rarely have we disagreed about anything, but this Mamet play definitely divided us. As it did most of the audience. The play is a tight, increasingly tense and provocative 75 minutes. After the curtain call, two attorneys who practice in sexual harassment law participated in a talk back. The audience was definitely divided in opinion, and not just male vs. female.

Oleanna was written in 1992. It's the story of a female student and male professor, played by Julia Stiles (Broadway debut) and Bill Pullman. Although she accuses him of sexual harassment and rape, it's more the story of a he said/she said and the abuse of power. Its first New York run was off-Broadway a year after the Justice Clarence Thomas confirmation hearings in which Anita Hill testified that he sexually harassed her, which perhaps even more brought the issues of the play to the forefront. It's horrifying that even 17 years later, these issues are not resolved and are still so incendiary.

Although it seemed to me that her story was slightly contrived and exaggerated, I could not help siding with her. Not simply because she is a woman, but because of the fear of power that I personally feel. When I was a senior in college, I had to visit my International Politics professor to plead my case in order to gain the grade high enough to pass for graduation. He did nothing improper, but I still feared his power - I had everything to lose and he owed me nothing.

Also, it was easy to be prejudiced against Pullman's professor because he acted like a jerk. He's published and sees his own opinion as the right opinion, even though the student doesn't understand it. He makes very little attempt at helping her understand it. He seemed more concerned with his own personal success - he was about to be tenured - rather than teaching. I was infuriated for her when he made her wait while he attended to personal business over the phone, especially when he knew that she needed his help.

Although physical advances by him seem to be no more than a mere touch and inappropriate and suggestive language, she is understandably hurt and offended. What we don't see is more of a physical violation on his part which makes it hard to understand where her escalation of the accusations are coming from - which is what makes the play perhaps the most controversial as it sends him into a spiral of desperate destruction of his career and personal life.

I still feel fear of power at times in a male-dominated work place. There is a particular person at my office who summons me for meetings and then makes me wait and listen to his telephone conversations, whether they are personal or business. It's a passive-aggressive act that he gets away with simply because he holds the power.

What I took away from Oleanna was a look at the the length at which someone is willing to go in order to stand up for her rights. Seldom have I felt that tense at a performance. It's classic Mamet - choppy dialogue, strong language, fearless realistic characters. It's such a play of inference that you really can't know the truth - I would even guess that if I went back I might feel differently. Doug Hughes' direction is tight and he does a great job of intensifying the wait - you know something ominous is going to happen by the mere opening and closing of the blinds of the professor's office. I loved Julia Stiles' performance - she held her own against the more experienced Bill Pullman.

Oleanna is playing an open ended run at the Golden Theatre on West 45th. To save over 40% on tickets, just visit BroadwayOffers.com and enter code OLMKT93. Tickets are only $59 on Tuesday-Friday or $65 on Saturday and Sunday! (Valid through 11/15)
at 3:05 PM

What a splendid reviewer you have become. Your review was professional yet personal and drew me into the argument as if I were there.