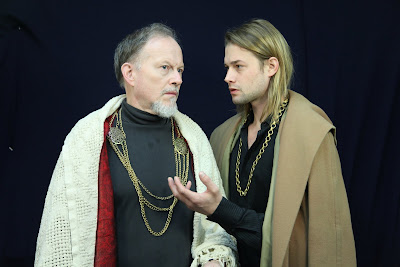 Alexander Pushkin, "Russia's Shakespeare", was a poet, novelist and playwright. He was born in 1799 and died young after his twentieth and final duel in 1837. Opera fans know his masterpiece novel Eugene Onegin which served as the libretto for Tchaikovsky's Onegin. This year marks the 210th anniversary of Pushkin's birth. To celebrate, the world premier in English verse of his Little Tragedies is presented at the Baryshnikov Arts Center (formerly 37 Arts) in Manhattan.

Little Tragedies is four short, separate plays: The Knight-Miser, Mozart and Salieri, The Stone Gust and The Feast in Time of Plague.

The Knight-Miser featured Peter Von Berg as a rich Baron and Brandon Ruckdashel as his son Albert (both pictured here). The Baron is richest man in the world, but has denied his son any support. While Brandon is underutilized, his presence is strong. Peter Von Berg leaves no doubt that he is the strongest member of this ensemble and his delivery is powerful.

Mozart and Salieri is the most interesting of the four. It's based on Pushkin's belief that Mozart was murdered. Luiz Simas is Mozart and Julian Henry Lowenfeld is Salieri. While both actors awkwardly deliver that dialogue and seem very unpracticed, the story is beautifully interspersed with Mozart's work by Simas at the piano and vocally by soprano Nika Leoni.

The Stone Guest is a re-telling of Don Juan, this time in love triangle with his mistress Laura (the actual prototype for Carmen) and the widow Dona Anna. This is the longest of the four pieces and it felt it. Stephen Innocenzi does a nice job as Don Juan. Brandon is once again underutilized as Don Juan's exasperated servant. Dona Anna is played by Karen Jane Chapman. However, the real treat in this play is Nika Leoni as Laura and hearing her sing at the bottom of the act is worth the wait.

The final piece brings the entire cast in for The Feast in Time of Plague. It's a drunken wake for a friend, filled with recitations of poetry and song. Here, both Brandon Ruckdashel and Nika Leoni get the chance to show off their vocal talent.

I attended on opening night, which was a treat because the audience was full of Russians. Professor Nadezhda S. Braginskaya, serving as literary consultant to the production, spoke before the show. Unfortunately, she only spoke in Russian and then quite hysterically didn't want to stop. Julian Henry Lowenfeld finally emerged, in costume, and persuaded her to wrap it up.

Unfortunately, actor John Leonard Thompson was out that evening and Lowenfeld stepped in to read his lines.

The lighting and costumes were the highlight of the production itself. I would love to see Mozart and Salieri further produced. Since I am a fan of Pushkin, it was a huge treat to hear this work as it has not previously been available.

Little Tragedies runs through November 14th. Tickets are available via SmartTix.
at 6:13 AM