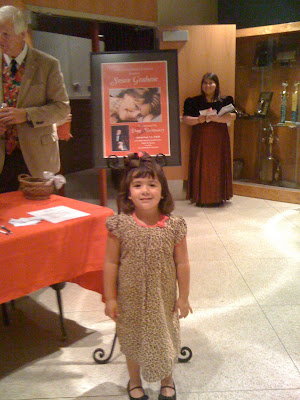 My niece Cara, a kindergartner, attended Susan Graham's recital at Midland Lee High School this evening. This was Cara's first classical music recital and she lasted almost to the end. She said, "That girl sang real good and that boy played piano good."

Susan Graham returned to the stage of Midland Lee High School last night, where she made her debut as a 17 year old in The Sound of Music when she sang the role of Maria. The song sets included "Non so piu cosa son" from Mozart’s Le nozze di Figaro,
"Voi che sapete" from Mozart’s Le nozze di Figaro,
"Va, laisse couler mes larmes" from Massenet’s Werther, "Liebst du um Schönheit" by Gustav Mahler, "Habanera" from Bizet’s Carmen, "Seguidilla" from Bizet’s Carmen, "The Sound of Music" from Rodgers & Hammerstein, "Fascinating Rhythm" by George Gershwin, "Someone to Watch Over Me" by George Gershwin, "Summertime" by George Gershwin, and "A Christmas Medley" (the audience joined in on "White Christmas").

Doug Montgomery also performed a number a pieces alone. At the end of the recital, Susan continued with her diva bow long after Doug had left the stage. He returned and dragged her off, bringing down the house.

My mother and sister also attended and met Susan at the reception in the cafeteria after the recital. They were pleased to meet Susan, who knew they were coming (or else face my wrath) as she had seen my earlier blog post about her recital. They called me on their way from the high school, full of praise and excitement. It sounds divine to me.

Mom and I will be seeing Susan perform in Der Rosenkvalier at the Met on January 15th - its just one of my favorite roles that Susan performs. This will be Mom's second Strauss opera - the first was Salome, which she said was "interesting"...I think she'll have a little more liking for this one. She has also seen Renée Fleming perform once at Carnegie. So now she's all set with sopranos, mezzos and who's who among my faves. 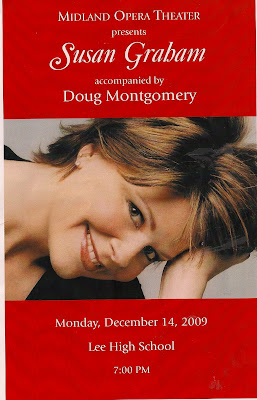 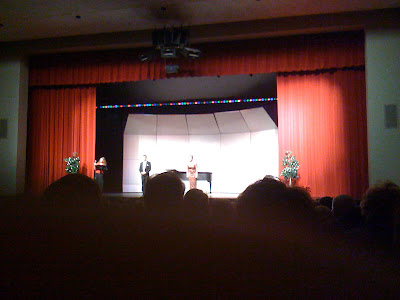 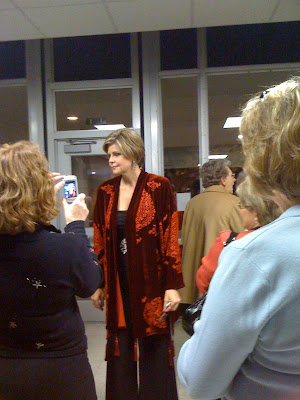 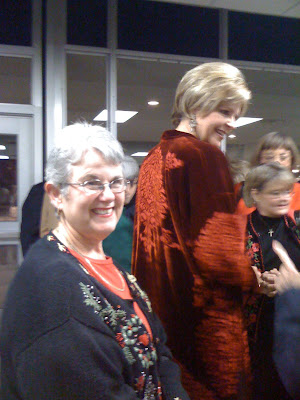 Great Sarah! Was Susie a student at that school? I'd be interested to know what she sang.
Is that your mom in the second picture?

Hi Mim! Yep, Suzy is a graduate of Midland Lee High School in Midland, Texas. My sister lives mere blocks from there. And yes, that is indeed my Mom in the picture!

Love that pic of your mom "with" Suzie!

Surprisingly, she kept the sparkle to a minimum...

Did I read your post correctly? Did you say SUSAN GRAHAM READS YOUR BLOG? That is a great honor to you, which is also something of an accolade to me for being able to have come to acquaint myself with you via your blog, and to think that my blog is featured on your page makes me that much more thankful to know you.

I am also pleased that Cara seems to have some predilection for opera singers since most children that young do not enjoy such music at all. Her review of the evening says all that we need to know!