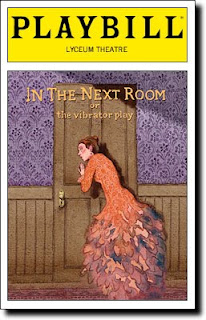 Beginning as a ridiculous and somewhat awkward premise, the play weaves into an honest and beautiful story about enlightenment in several relationships in the story. At times it's very funny, thanks to great execution by Laura Benanti. By the end, it has evolved into a thing of beauty (and I don't just mean a complete strip by Michael Cerveris).

There are a number subplots that interweave with Mrs. Givings' story as the characters become intimate with each other. The doctor's surgery is in their home, yet he attempts to keep his wife isolated from his work, further sheltering her. First, she innocently meets Mrs. Daldry, played by Maria Dizzia, a female patient and her husband played by Thomas Jay Ryan. Second, though she is a new mother, she is unable to adequately nurse her baby. Mrs. Daldry just happens to have a black servant, Annie played by Quincy Tyler Bernstine, who has recently lost her own baby and is available as a wet nurse. A male patient, Chandler Williams, comes into their lives complicating things further both for Mrs. Givings and Annie. Finalizing the cast is lovely Wendy Rich Stetson, as Dr. Givings' assistant, who has her own sad journey to travel.

Mrs. Givings befriends Mrs. Daldry. As she recognizes that Mrs. Daldry's "treatments" are succeeding, she conspires with her to learn just exactly what the treatment is. She attempts self-treatment, but it's not just physical stimulation she longs for. She wants love and attention from her husband.

At the climax of the play, the transformation of the set is breathtaking. Up until that point, the set, by Annie Smart, is just two rooms of a comfortable house, complete with electrical lights. David Zinn has designed pretty period costumes, appropriately complicated at times. Les Water, making his Lincoln Center Debut, directs the play at a nice pace.

In the Next Room is playing at the Lyceum Theatre on West 45th Street through January 10th. While there isn't a rating, it is best suited for a sophisticated or mature audience. Discounts are available via Broadwaybox.com.
at 1:02 PM

I'm glad you enjoyed the play too. I loved it, especially the ending.