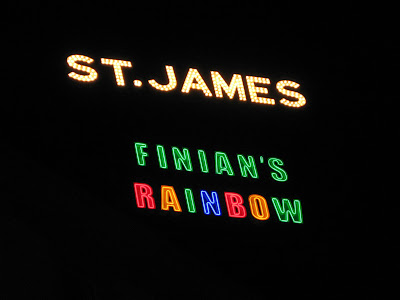 Fortunately, this cast has recorded an album of this glorious music by Burton Lane and E.Y. Harburg.  It's available for pre-order.  It's song after song of pure joy.

I saw it last night and was disappointed that Cheyenne Jackson skipped the performance, though his understudy Brian Sears was excellent. I understand he also missed Friday night and the Saturday matinee. Did Cheyenne make the last performance?

I heard that Cheyenne had already committed to concerts in CA w/ Michael Feinstein - you may know that they recorded an album together. He was there at the last performance. I find him an even performer and I do like his glorious voice, but he's not inspiring in any particular way.

I find it very disappointing to discover that a musical entitled American Idiot featuring the songs of Green Day is replacing Finian's Rainbow with Kate Baldwin. Do you have plans to see this new offering? I am certainly not looking forward to it or its success.

Hi Tyler - Broadway is a business after all.