In the After Glow of Ann Hampton Callaway 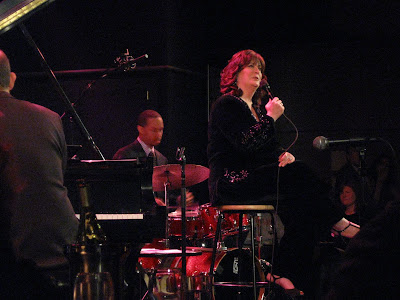 Before going with my friend Christine to see Ann Hampton Callaway's set at Dizzy's Club CocaCola, I wasn't exactly a virgin fan of Ann's.  Her show was part of the American Songbook series for Jazz at Lincoln Center.  I was knocked over the edge and now I am enjoying being a full-fledged devotee. I confess that I am still basking in the after glow and I cannot stop listening to her.

Several years ago, my friend Robert Bullen, the Chicago Theatre Addict,  introduced me to Ann Hampton Callaway after I talked to him about her sister Liz Callaway, who I had seen in cabaret at Feinstein's and at several benefit performances.   I liked Ann and was interested but didn't take it any further.

Then, at last year's Theatre World Awards,  Ann Hampton Callaway amazed me when she performed a song that she wrote on the spot with lyrics suggested by words and phrases called out by the audience.  The song was all about the Theatre World Award Recipients. Earlier this month, I saw her again perform this magical talent at the Drama League Gala, this time in honor of Angela Lansbury.  The ease and speed in which these songs were composed, in front of an audience, is nothing short of astonishing.   Then she further blew me away with a soul stirring rendition If He Walked Into My Life from Mame.

Robert nailed what it's like to listen to Ann when he said to me, "Her voice, to me, is like cognac. So smooth, so calming, so sensual, so adult."   Her set at Dizzy's was exactly this; but, also throw in saucy, sexy and sparkling with humor and you get a spine-tingling evening that has you yearning for more.  I had to run home to iTunes to find as much of her music as possible.

Being at Ann's show at Dizzy's had that familiar feeling of being at Feinstein's - it's classy, grown-up and so New York.  I always feel like I am at a private party where there just happens to be a singer. Dizzy's Club CocaCola is on the 5th floor of the Time Warner Center and overlooks Columbus Circle and the night skyline of east Manhattan .   The food and drink are cheaper than some those cabaret nightclubs on the upper east side and you just need a reservation via Open Table.

Because this was American Songbook and Jazz at Lincoln Center, Ann treated us to the jazziest of arrangements with the help of Ted Rosenthal on piano, Willie Jones III on drums, and Peter Washington on bass.   She opened with I've Got the World on a String, then threw in Porter, Mercer, Cole and of course, Gershwin.  Her presentation of In the Wee Small Hours, a 1955 tune written for Sinatra by Bob Hilliard and David Mann, nearly did me in. Then she could have knocked me over with a feather with the most grooving and soulful performance of Blue Moon, by Richard Rodgers and Lorenz Hart. She said that Rodgers didn't even like jazz, but that didn't stop her here, with the codicil, "I don't want any body to be single and bitter in this world. I'm going to give you a Diva spell." And believe me, she put a spell on us.

She didn't leave all of the ivories to Ted Rosenthal: she took a break from the jazz to perform "I've Dreamed of You" at the request of an audience member. She wrote the lyrics at the request of Barbra Streisand, who sang them to James Brolin at their wedding.   Before wrapping up the evening, she treated us to another song composed on the spot with lyrics suggested words and phrases called out by the audience.   This time, the key lines of the song were "Hot Monkey Sex".   The trio started a groove and she jumped in with the lyrics.  I thought it wouldn't go anywhere as the concept seems a tad ridiculous, but it was actually grin-inducing and sexy song.    Several jazz musicians, who received a shout out by Ann and were seated at the table behind us, added to the fun by joining in on the rhythm as they chanted "Hot Monkey Sex".  Her finale of the evening was the quintessential song of the American Songbook, Somewhere Over the Rainbow.

We were glad to hang out at Dizzy's for a just a bit, while Ann greeted friends and fans in the audience.  I enjoyed telling her how much I enjoyed her performance at Angela's Gala.

Her upcoming tour dates include this weekend with the Cincinatti Pops Orchestra and six nights in San Francisco at the The Rrazz Room at Hotel Nikko.   Recently, she mentioned on her Facebook that she's been working on new material with her sister Liz...something I'm hoping they'll bring to New York City.  In the meantime, check out her many albums - my two favorite so far as At Last (which Ann describes as a make-out album) and Blues in the Night. 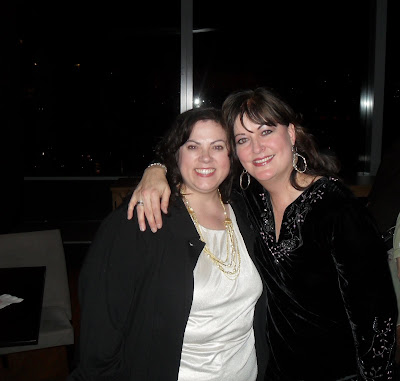 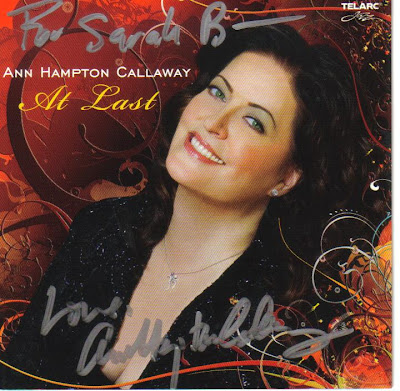 Great post! 14 years ago, I discovered Ann via her sister Liz. Ann's been on permanent rotation ever since. I've been lucky enough to sing her charts, been in her audience and supported every move she's ever made. Her "I Gaze In Your Eyes" is a classic.
Glad you enjoyed her set at Dizzy's!

Dear Sarah,
Wonderful post about Ann. I enjoyed hearing 2 different sets from her @ Dizzy's last week. She's awesome and my favorite singer. Just thought you would want to know that tickets for her Boom show with Liz are selling quickly. i just bought 4 in row Q (best Avail). June 4th Town Hall Theater NYC.
It will be great! I'm really looking forward to it. My mom will hopefully be up from FL to see it with my family. Boom is wonderful! I saw the 1 hour showcase condensed version at the Iridium in January.

I had SUCH a wonderful time at this performance. Those are two of my favorite CDs as well (especially "At Last").
Her CD "Slow" is also quite nice. It features Carole King and Liz Callaway.

I loved that quote comparing Ann to cognac.