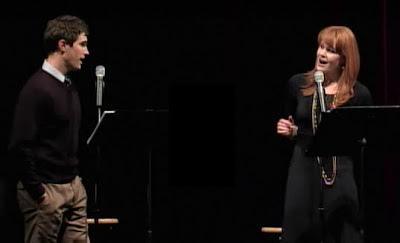 I encouraged my friend Chelsea, who lives on the Hill in DC, to go.   Well, I insisted that she go, especially when I learned it was free.  FREE!  Kate Baldwin FREE!  Matt Cavenaugh FREE!

The obedient and trusting girl she is, Chelsea braved the "Snowmageddon" and trudged to the Kennedy Center to honor my command.    Here's an excerpt from her blog post at A Fish Out of Water:

Our evening of "Broadway Today and Tomorrow" featured the works of Peter Mills with the lovely Kate Baldwin and Matt Cavenaugh singing. It was a mixture of solos and duets - some funny and others poignant and sincere. Cavanaugh had a pretty good voice, but it definitely had that Broadway sound to it. Which I guess is a good thing since he's singing Broadway tunes. Kate Baldwin just had a flat out great voice. It was like a ray of sunshine in a hopelessly dreary day. She was so upbeat and perky when the song called for it, yet so touching and heartfelt when needed. My favorite song she sang was from Golden Boy of the Blue Ridge. It was just stunning! And she managed to put a slight country twang to it without sounding hoakey. After several other songs Matt and Kate finished with a duet about a missed connection. On the surface it was pretty funny because he is talking about a bad connection on the phone. Yet it's a bit sad because she's discussing a bad connection in the relationship. I don't think it ends well..

When the show was over, I was about to leave. But I lingered long enough to see Kate and the others come out into the audience. I decided that I couldn't trudge all this way through snowbanks and slush puddles without telling Kate that Sarah sent me. So I said "Hello!" and thanked her for coming despite the weather. Kate was a super lovely person and very engaging. She asked how I met Sarah (the bloggosphere) and then said how she owed her career to Sarah's blog. I wished her safe travels back to New York and went on my way - a bit happier and a little less cabin feverished.

(Now, I don't agree with Kate about her owing her career to me, but I'm absolutely flattered and thrilled that I maybe helped even a little. Honestly, she is one of the brightest and best and she deserves every accolade and success due her.)

Thanks! I figured I'd be getting one serious Harriet Waltering if I didn't go. Sarah is kinda persuasive that way.

I'm thinking next time I put in an amazon order, Kate's cd will be making it into the shopping cart.